Iker Casillas Is Not Finished.... 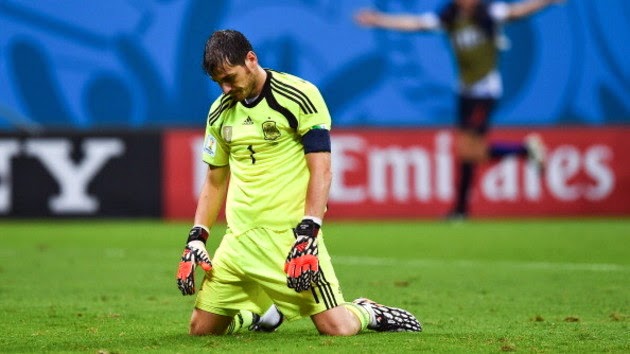 A hero to millions, and winner of the proverbial 'everything there is to win,' Iker Casillas saw his reputation take a double knock in recent months, first with a blunder in the Champions League Final, then with two entirely unconvincing displays at the World Cup. Spain slumped home, the defending champions out t the group stage, and Casillas came in for a large share of the blame. And it wasn't just these latest blunders that had people wondering. A pair of Real Madrid managers, Jose Mourinho and Carlo Ancelotti, have both preferred Diego Lopez in recent seasons. Clearly, 'San Iker' has been on the wane for some time. It's natural for athletes to decline with age. Nobody stays on top forever, and Casillas has been playing on the grandest stages since the late nineties.

But...he only just turned 33 last month. An age-induced decline really should not be happening now. What else could it be?

There's an old saying about cars: it's not the age, it's the mileage. Casillas has been performing at the top for a very, very long time now. He is approaching 500 appearances for Madrid, and ticked past a century and a half for Spain just prior to the World Cup. He has also, in that time, won a ridiculous array of trophies for both club and country. It would be fair to ask if his motivation may have waned, both to prove himself (which he will rightly feel he did long ago) or to win trophies. Goalkeeping is a very unforgiving position. Lose focus or drive even momentarily, and things will go bad in a hurry.

Casillas has always played a relatively low-risk style, preferring to stay on his line more often than not and rely on his outstanding reflexes and footwork. It's notable that some of his recent errors have come from him coming off his line ill-advisedly, as in the Champions League Final or for Robin van Persie's absurd flying header. There is a natural temptation, perhaps even for a decorated pro, to try to do a little more when you've been questioned, doubted, or dropped.

Iker Casillas doesn't need advice from me or anyone else, but he does need to get back to what he does best: playing the angles and making saves. The hard part will be finding the motivation for this career second act. For a player who enjoyed nothing but success and adulation, it surely can't be easy to be in this position now. There must be a temptation to shrug, point to his collection of medals, and insist there is no problem. But that's not going to get him back into the Madrid first team.

Edwin Van der Sar went through a similar mid/late career slump, which saw him bustled out of Juventus to Fulham, where he performed only adequately. To his credit, he recognized the massive opportunity presented him by Sir Alex Ferguson, and excelled during his time at Manchester United. His motivation would have been simple to find: a second chance at glory, success, and trophies.

Faryd Mondragon just played in the World Cup for Colombia at age 43. There is no physical reason Casillas can't go on for close to another decade; it's just a matter of his motivation.

Admin, if not okay please remove!

Our facebook group “selfless” is spending this month spreading awareness on prostate cancer & research with a custom t-shirt design. Purchase proceeds will go to cancer.org, as listed on the shirt and shirt design.