The Ball Moves - Deal With It

Hakan Calhanoglu of Hamburg did this on Saturday:

How does a goalkeeper as talented and experienced as Roman Weidenfeller get beat from 40 yards - with the ball hitting not the extreme top corner, but a part of goal you'd expect a top-class keeper to reach?

Because the ball moved. A lot.

On first and even second viewing, I thought Weidenfeller was guilty of being flat-footed. And, technically, he is. But still images make it easy to understand why.

This picture (click to enlarge) shows that halfway to goal, the ball has traveled on a straight line, from Hakan's foot toward Weidenfeller in the middle of goal. It has no spin, so it isn't bending predictably to the keeper's right. It is flying straight at him. 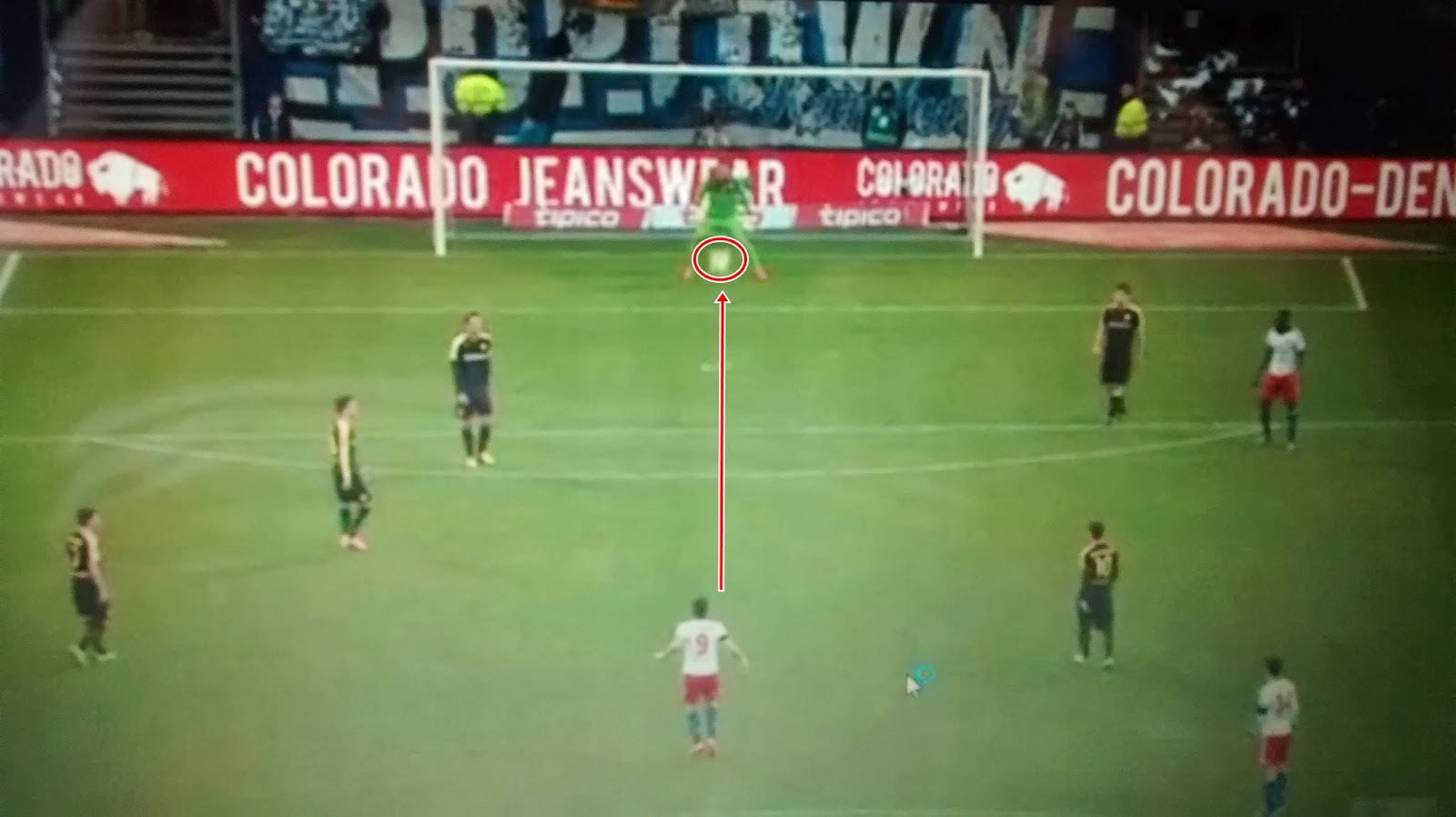 What this picture doesn't show, but action replays do, is that the ball is also traveling in a severe arc. So not only does it look to Weidenfeller that the ball is coming straight down the middle of goal, it probably also looks to be going over the bar at this point.

Now look where the ball ends up, compared to its original line of flight. 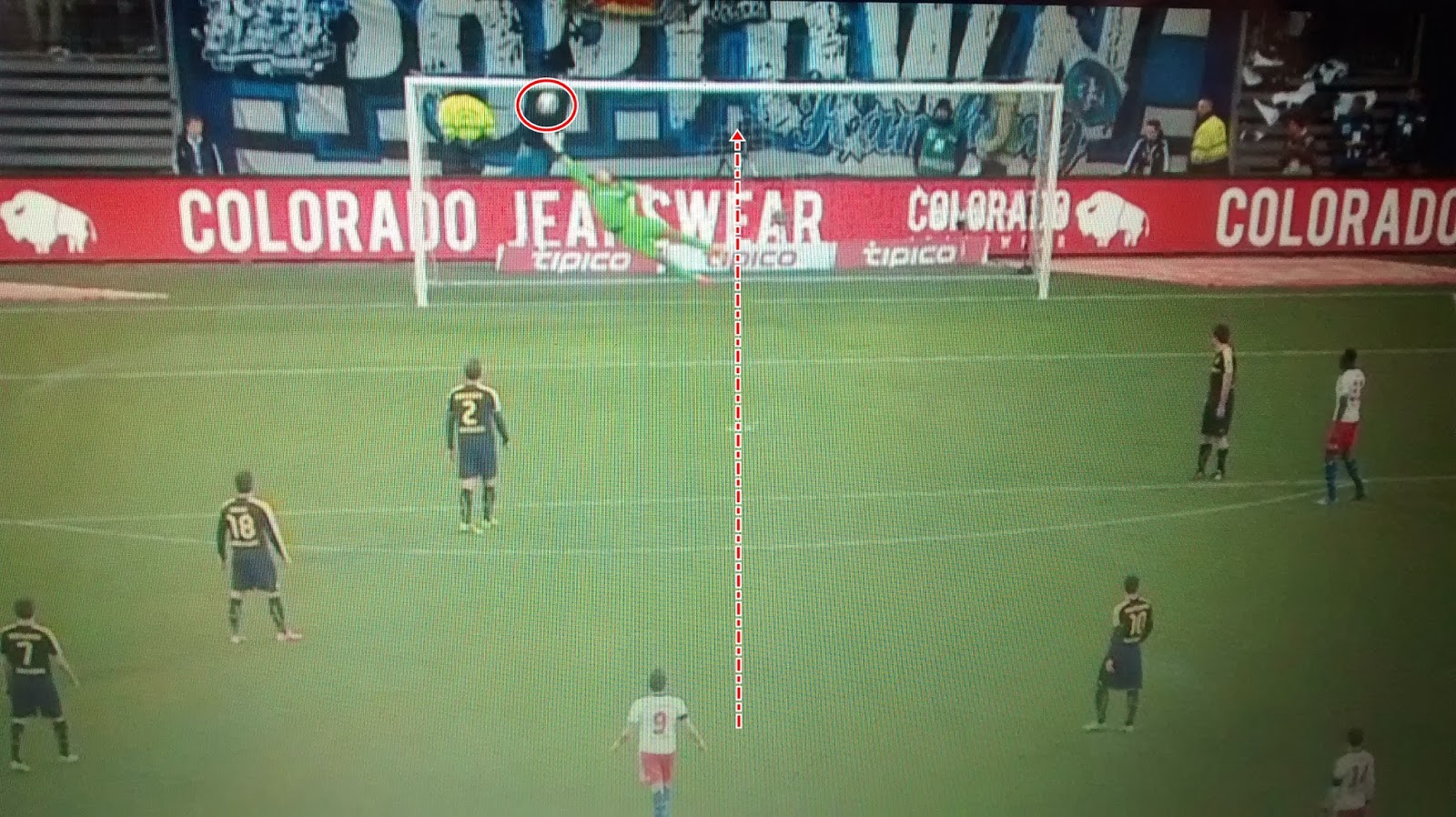 A late swerve of a full six feet to the left, coupled with a vicious downward dip, leaves Weidenfeller helpless, despite his best efforts.

The lack of spin, of course, explains why the ball swerves and knuckles so deviously. If you'd like a scientific explanation of why this happens, you can read it here.

This free kick, effectively, is like a deflection. The keeper is set and tracking a shot going to one place (middle of the goal), only for it deviate to another late in its flight. It's irrelevant how far away Calhanoglu was when he struck the ball; all that matters is the time Weidenfeller had to react when it deviated from its original course.

So how to deal with these situations?

Footwork is key. If we're going to be at all critical of Weidenfeller here, we might look again at the first picture. There's a clue there: 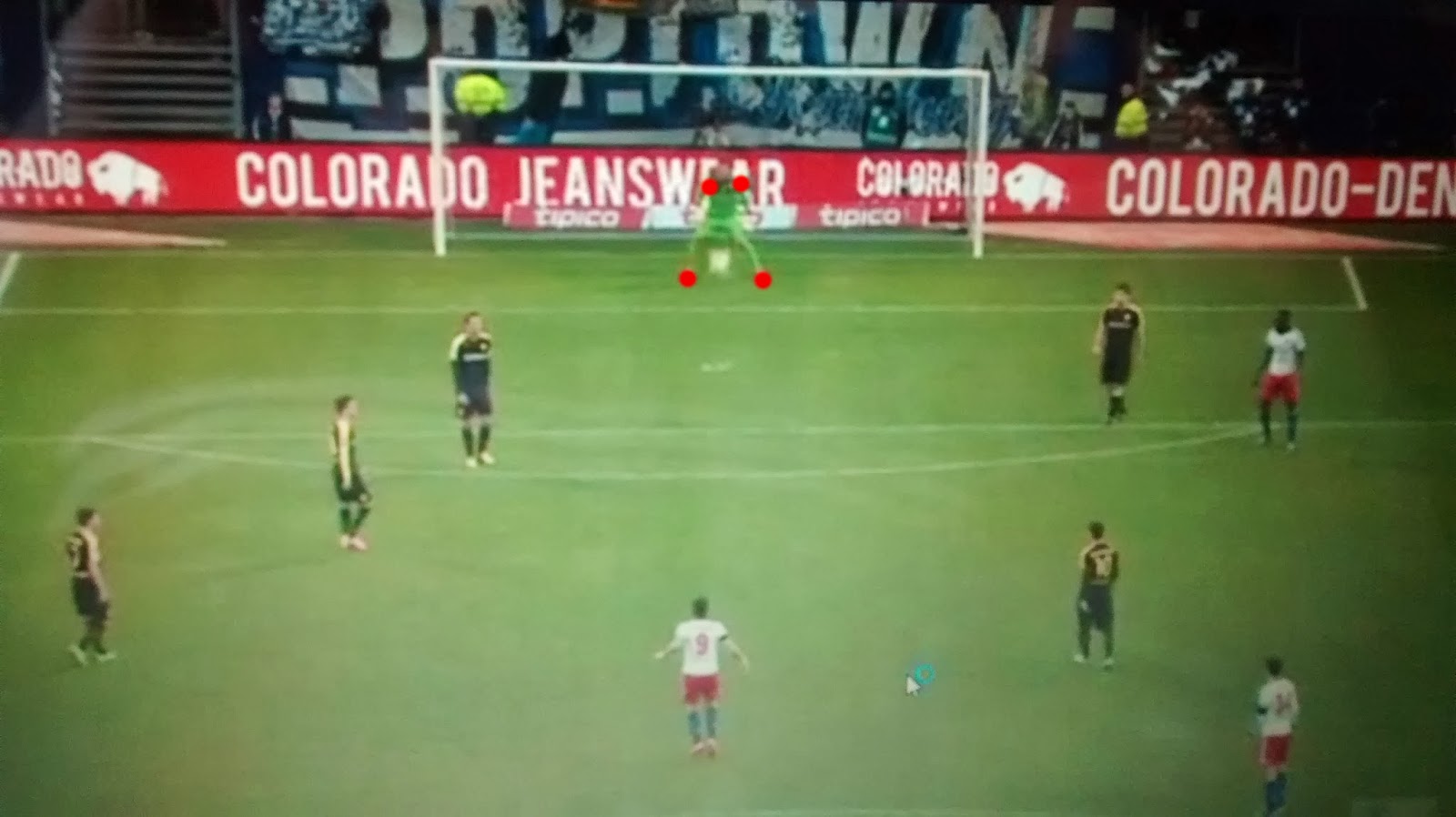 We can see that he has got into a set position with his feet significantly wider than the width of his shoulders. When you split your feet this far apart, it consumes precious fractions of a second to get your center of gravity and weight to the outside of your foot, which is where you need it to be to dive. It also means he has to dive without the benefit of a couple of quick, small shuffle steps, limiting his range.

Ideally, in training we reinforce our set position and footwork hundreds of times. Still, we have these reactions in games. Splitting the feet wide is a natural response when we feel we need to brace ourselves for powerful shots struck right at us. The problem comes when it turns out they're not right at us.

I'll say again that because of ball movement, long-range shots demand much the same from keepers as deflections. Training for one, therefore, is useful for the other. Activities incorporating redirected shots, an unsighted keeper, or using balls designed to move unpredictably like the Responseball can all help.

We also must understand that you have to keep 'fighting' a moving ball throughout its flight. Dealing with a shot that moves like this demands multiple technical adjustments in our footwork and body shape, but just as importantly, it demands competitiveness. You have to be simply unwilling to be beaten, and do anything you can to prevent it. You have to also accept that these shots will always be much harder to deal with than your coaches, fans, and teammates may understand. It's just another challenging part of the special job we do.
Tweet

I am glad we don't use those balls or have anyone that could strike one like that in our league. That is ridiculous.

You said it Brian. I want nothing to do with a shot like that.

Nice analysis... as soon as you pointed out his stance I could feel the wide feet below unable to react. And you can see his spring in the video, off of the wide stance he is fighting gravity, with no pop.

That said, you don't even mention the initial knuckle on the ball, before it straightens out. Brutal strike... I love the commentor: "Who'd want to be a goalkeeper?!!" Brilliant!

Don't know if you saw it, but Weidenfeller (sp?) got beaten on another incredible long-range blast, this time from Hulk. I watched the video closely, and you can see that, just as Hulk strikes the ball, Weidenfeller drops his stance with his feet planted wide. Hmmm... Not that he can be blamed for the goal, 'cause it was a crazy strike, but he again struggled for height and range on the dive having set so low.