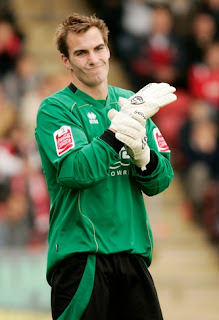 Glove gods Selsport - whose name and images you might have noticed around this site before - have been conducting interviews with their endorsees, and I'll be happily reproducing them here. First up is Scott Brown of Cheltenham Town. Scotty is active and engaging on Twitter, so give him a follow at @Scotty_brown85.


Scott Peter Andrew Brown (born 26 April 1985) is an English footballer. A goalkeeper, he is a product of the Wolverhampton Wanderers youth academy and played in the League of Wales for Welshpool Town before signing for Bristol City and then at the start of the 2005–06 season joining Cheltenham Town.

Who has been the greatest influence on your career?
I think my family have been very big influences on my carer. If it wasn’t my mum picking me up from school and taking me straight to training at Wolves three nights a week and games on a weekend, it was my dad kicking balls at me in the park or the garden to help me or watching or supporting me at games. My brother and sister have also been very supportive of me as well. In terms of coaches, I think Mike Stowell who I was with at Bristol City did a lot for me. I have become very good friends with him since, and has been a great source of help and advice since I left. My coach now at Cheltenham, Steve Book, has been great for me. He is always out working with the goalkeepers and always trying to improve us and probably most importantly his sessions are very enjoyable.

Who do you rate as the top 3 goalkeepers in your football lifetime and what qualities did you
most admire about these keepers?
1 – I used to love watching David Seaman. He had such a great presence about him and was so calm with the way he went about things and never seemed flustered by anything.
2 – When I was at Wolves I got the pleasure of working with Matt Murray, who, if it wasn’t for injury,
I think would have been one of the best goalkeepers in the Premiership. He used to come for absolutely everything in the box, and his hands and shot stopping were amazing to.
3 – In the current era, I think that Joe Hart is one of the best best in the world and can only improve. But in the Euros I was very impressed by Gianluigi Buffon. I hadn’t really seen much of him before, but I thought he was the best goalkeeper at the tournament.

Do you feel that the current coaching for goalkeepers in the UK is relevant to the modern game?
Yes, very very important, and I don’t think that there is enough emphasis put on just how important it is. I think all full time football clubs should have a full time goalkeeping coach, but unfortunately finances dictate that this is not always possible. Coaching is evolving, especially goalkeeping sessions, and are becoming better and better and more game-relevant.

If you were to play in another country which country would you choose and why?
Spain I think, because of the sun, and would love to live by the sea.

Which types of training sessions do you prefer to take part in?
High tempo or more technical sessions. I prefer a bit of everything. I don’t like to go into games thinking, "I should have done this, I should have done that." I like to have ticked all the boxes. 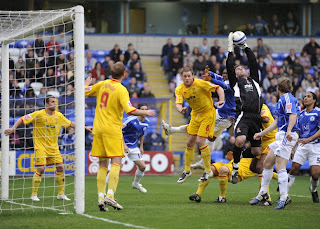 What has surprised you most about being a professional goalkeeper?
I think the most surprising thing was how alone you are. Sometimes it can feel like its just you and the goalkeeping coach against the world. You could have a not great game and keep a clean sheet and everyone says well done, but then have a great game and lose two-nil but only you and the goalkeeping coach will realise that you have had a good game, despite the result.

What are your thoughts on English goalkeepers in recent years?
I think that they are not given enough chances at the top level, which is why they haven’t developed as well as some have expected. But with the likes of Hart, Robert Green and Jack Butland, there is plenty of talent coming through.

If you could choose one piece of advice that you have been given to pass on to another goalkeeper, what would that be?
Like I said earlier, I like to tick all the boxes, so I would say, don’t regret what you didn’t do, whether that is in terms of training, stretching, eating and drinking right, or in a game situation.

If your best friend in football was asked to list your three biggest strengths as a goalkeeper, what
would he say?
Hmm, I would say, shot stopping, kicking, and decision making.

Do you practice mental prep skills as part of your weekly training?
I practice visualisation leading up to games, particularly the night before. It is something I have started to do recently and want to do more of, as I believe it is very beneficial to performance and confidence. 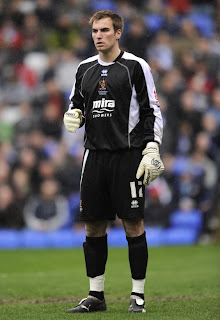 What exercises are most beneficial for young keepers to practice?
Anything match related is a good exercise. If it’s not match related or technique related then why are you doing it?

If you were to design your own kit what color style would you choose?
I would go baby blue or yellow as I like those colours.

Do you have any particular rituals or superstitions before games?
Yes, I always put my left glove on first, then take it off, then put it back on again before the right one. I only do this the day before a game and on a match day.

Any goals for the next year?
Hopefully build on last season and hopefully go one step further than losing in the play off finals.
Tweet