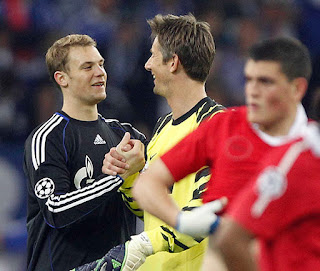 Okay, I concede: it really is spring in New York now. But filming of the hill sprints is going to have to wait awhile yet, as my cameraman is AWOL. Soon, though. Soon.

Watching Manuel Neuer's remarkable display against Manchester United - and, lest you didn't notice, a couple of difficult situations handled with apparent ease by the imperious Edwin Van der Sar - got me thinking once again about the role confidence plays in goalkeeping. If I haven't mentioned it before, I'll reiterate: confidence is everything. Of course, you've got to have something to be confident about. All the confidence in the world won't help if you don't have the basic ability to catch a football. But the reverse is also true: a physically gifted but psychologically fragile goalkeeper will be more a liability than asset.

It starts with body language. Neuer and Van der Sar both carry themselves with an air of inherent superiority. Van der Sar has for years played with the raised-eyebrows look of someone surprised to find anyone bothering to challenge him. Neuer, gifted with an imposing physique, puffs out his chest and struts around his box like a man largely untroubled by the world. They are not alone in this, of course - Iker Casillas turned in another commanding performance in Madrid's Copa del Rey win over Barcelona, a game in which he seemed to keep the Catalans off the scoresheet by the sheer force of his will, and Allan McGregor of Rangers had a game to dream about in the latest Auld Firm battle. You could see the confidence flowing from both of them. 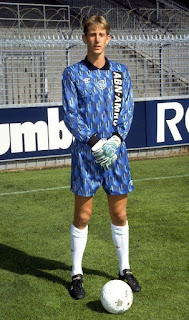 He might not be so confident if he still looked like this
Back in the 90s, I recall being impressed by the confident body language of Chelsea keeper Dmitri Kharine - remember him? Good keeper, great mullet. He may not have been the world's best keeper, but he carried himself as if he were, and as a result, he had a good career. Not many people noticed, perhaps, because the 90s belonged to Peter Schmeichel and his outsized personality. In the 80s it was Neville Southall and Bruce Grobbelaar, keepers for whom confidence was as much a part of their arsenal of skills as agility and handling. 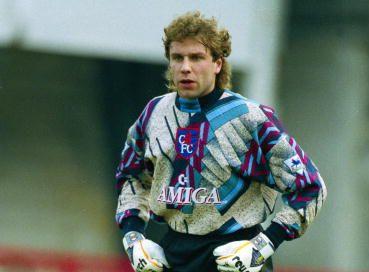 The hair, the jersey - magnificent
If it's easy to spot a confident keeper, then sadly, it's equally easy to spot a fragile one. Their body language is the opposite of, say, Neuer's: they seem to retract within themselves, want nobody to notice them, are hesitant to make decisions. The Catch-22 of goalkeeping is that if you play as if you're afraid to make mistakes, you are more likely to make mistakes.

The good news about confidence is that it works even if you have to fake it. In other words, even if you don't feel confident, if you can act confident - slow down your breathing, stick out your chest a little bit, carry yourself like you mean it - your teammates and opponents alike will get the message, and they're the ones who matter most.
Tweet

"Van der Sar has for years played with the raised-eyebrows look of someone surprised to find anyone bothering to challenge him." - this is a sentenced Douglas Adams would have been proud of.

Thanks Flow - I think! I loved Douglas Adams. Gone too soon.

Thanks - I loved Douglas Adams.