The ability to jump high, dive explosively, and move fast are obviously critical components for modern goalkeepers. While some are content to rely on natural athleticism, others work hard to maximize their body's potential. This series is for the latter. 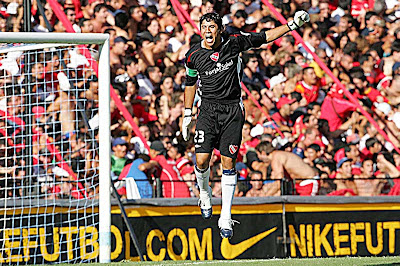 Oscar Ustari can jump. Can you?


The VertiMax Training System is...well, just watch the video, or at least the beginning. Much easier than me trying to explain.

For the record, I have no affiliation with VertiMax, and this isn't a paid ad. I just think it's an extremely useful tool for the modern goalkeeper. Not every gym has a VertiMax. I found one at Velocity Sports Performance in midtown Manhattan. Training regularly with it proved to be a bit hard to justify, continuing my age and also the noncompetitive level at which I now play. Nevertheless, in just a few sessions I felt significant improvement in both my vertical leap and first-step speed. Since the muscles involved had never been trained this intensely before, they responded very quickly.

If you can find a VertiMax near you, give it a try. Be prepared for pain. It's a lung-bursting, muscle-burning workout, and you probably won't walk very well the next day. Use it regularly though and I feel certain you'll see results.