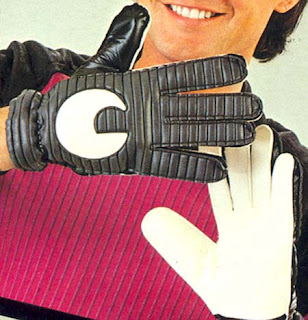 The Uhlsport 031 was a simple glove, both aesthetically and in construction. A flat palm glove with no wrist strap and no writing or graphics of any kind, it stayed in Uhlsport's catalog for only two or three years in the early 80s. It was ahead of its time in one way: whereas every other glove of the era had a body made of polyurethane or fabric with latex strips on the backhand fingers, the 031's entire backhand was made of latex, just as most gloves today are made. The smooth white latex palm was much thicker than average for the early 80s, certainly more so than the paper-thin palm on the more iconic 034.

For whatever reason, this simple piece of black-and-white latex is not only my all-time favorite glove, but it has become my Madeleine cake, the touchstone of my youth. It was the first glove I loved, and I can still remember both the first and last times I wore it. You're going to hear those stories now.

In a way, the 031 was a reality check for me. Most latexes back then were textured in some way - grooved, waffled, dimpled, etc - and I remember being dismayed as the three-layer latex on my Uhlsport 023s gradually wore away. When I first saw the 031 and its smooth palm, I mistakenly thought that it would last forever, because there was no texture to wear away. Oh, how young and foolish I was.

Hubert Birkenmeier of the New York Cosmos wore the 031 in the 1980 NASL championship game, the Soccer Bowl. I had also noticed more and more pros in England wearing them. 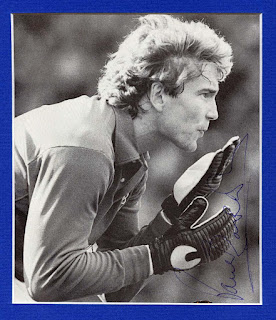 You couldn't miss the enormous logo. I got my first pair later that summer and wore them for the first time for the club team I played for in between high school soccer seasons. It took ten minutes of the pregame warmup for me to learn the truth about smooth latex - instead of gradually wearing down, as textured latexes did, great big chunks simply came tearing away from the palm. I was shocked and dismayed, and realized I would have to pamper the glove. Thereafter, I wore older gloves during warmups. But the 031 was my glove of choice during the critical years between 15-18 when I physically matured and became obsessive about goalkeeping.

It was an expensive glove for the time, somewhere around $25-30, so I couldn't afford to wear them every game. Luckily, my mother knew how important they were to me, so Christmas 1982 saw this bounty: two pairs! The black-and-yellow glove also pictured is the aforementioned 023. Great Christmas or what? And yes, I loved The Doors.

I played for my high school for two years, babying my 031s along the way, picking up another pair here or there with birthday money. 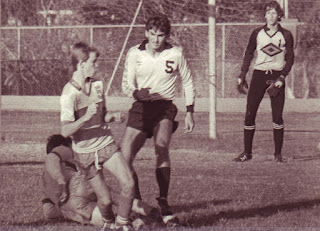 There I am in intense, thrill-a-minute game action, above, and below is me on the right, modeling them proudly, with my friend Marino Nardelli and his 034s. Talk about a couple of classics! 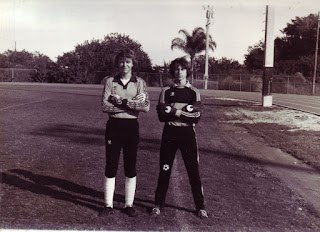 I played my first college game in September 1984, for Radford University against the University of Richmond, wearing the 031. I had a good game, saving a late penalty to preserve a 3-2 win, but it was the last time I ever wore the 031 in a game. Radford had provided me with a pair of the Uhlsport Zoff Allwetter, and I finally had to admit that gloves are better off with wrist straps. Here's the Allwetter, or as I think of it today, the Homewrecker: 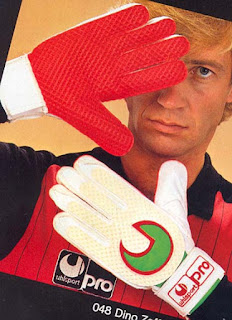 And here I am, wearing it while playing for Radford, having ditched the 031. What a dick. 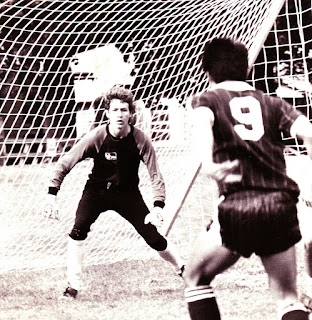 I don't have money to burn these days, but if I found a pair of authentic 031s out there somewhere, there isn't much I wouldn't pay for them. Sadly, it's not very likely. No matter how well you try to preserve them, latex gloves tend to break down and crumble over time. I know people with well-preserved pairs of the 023 or 034, but those models aren't made entirely of latex, as the 031 was, and their production runs also went on longer, so they may not be as old as an 031 would be.

The next logical step is to have a replica pair made. I've looked into this and even discussed it with glove-pimping genius Sebastian Selke, but I'm a little hesitant to move forward with it. My fear is that any glove that isn't exactly right will be disappointing beyond all reason. If I get an 031 in my hands, I want that Proust Madeleine moment, where one look, one whiff of that distinctive Uhslport latex smell from the 80s, transports me mind, body, and soul right back to that magic time in my life where nothing at all mattered except goalkeeping.

Last year, Uhlsport finally recognized their roots and produced a faithful replica of the 040, the glove worn by Dino Zoff for Italy's 1982 World Cup triumph. Isn't it beautiful? 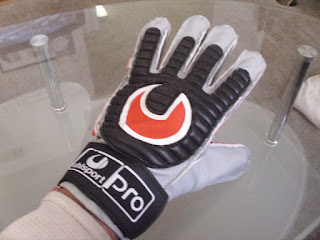 The replica is perfect in every detail, which means I either need to hope Uhlsport give the 031 the same treatment, or manage to find enough money to pay for a limited-edition run. Both are unlikely, but I'm not giving up hope that I'll find a pair out there somewhere, maybe on German ebay or in someone's attic. Of course, I kick myself every day that I didn't keep my own pairs. As I seem to ask of myself a lot these days: what was I thinking?

(If you didn't get the Madeleine cake reference, go here and read 'The Proust Connection')
photo credits: the author and Falk Simiering
Tweet

you are my hero,

i remember growing up and just loving the gloves that the pro wore,

Very interesting and informative blog, thanks for publishing it for us please keep sharing on Goalie Gloves. For more information, you can visit us.