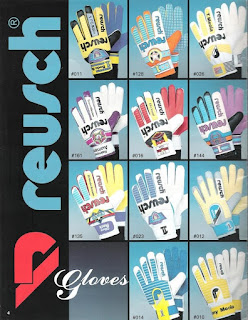 And now we come to the first ever rollfinger glove, the Reusch Meola (released at the same time in Europe, and with different cosmetics, as the International). The Meola version is the glove pictured top right, above (click picture to enlarge). I got a pair for free during the summer of 1990 while working at a goalkeeper camp, but I was sufficiently suspicious of the rollfinger cut - it felt like my fingers were being forced apart when my hands were relaxed - to stick them deep into my kit bag and forget about them.
Fast forward to December of the same year. I'm toiling away as the lone American at Boreham Wood FC in the Vauxhall-Opel League (now the Ryman League), and my pair of Reusch Uwe Kamps are torn to shreds. My pay packet of twenty-five quid a week won't allow for a replacement pair, so with no other choice, I turn to the Meolas.
And what a glove they turned out to be. The supersoft latex, probably 3mm thick, proved both durable and adhesive through thirty-three games in some of the worst conditions you can imagine. The 'pitch revolution' had not yet happened in England, especially at the Non-League level, and I played through winter and into what passes for spring in goalmouths covered with sand, wood chips, occasionally ice, and, most often, mud. I soon got accustomed to the rollfinger cut, and, as the only Yank in town, took a little bit of pride at the American flag on the wrist strap. I wasn't the biggest Tony Meola fan back then, though. I have to admit, I blackened out his name on the middle finger with a permanent marker.
I spent two different spells at Boreham Wood, and while my time there was not remotely glamorous, I enjoyed it greatly and learned a lot. Sadly, I've never managed to scrape up any pictures from my time there, just as I didn't bother keeping any old jerseys or gloves. It simply never occurred to me at the time. What an idiot.
One thing I did think to do back then was keep a game journal. After every game, I went home and meticulously noted every detail: the date, opponent, score, ground, and weather, then wrote up a one or two-page report of the game from my perspective. I also awarded myself a match rating of 1-10. I think they make for mildly amusing reading these days, and will post the occasional one in coming weeks. But coming next week is THE glove: the Uhlsport 031.
Tweet

I wore these gloves all through high school & college. I wish I could find a pair as I started playing again after 20 yrs. Great glove. Great durability.

I agree Eric - really great durability for that era. I'd love to find a pair. I have seen a picture of someone who has a pair in their collection, very well preserved.

Nice. I would love to get my hands on them. Actually in them.