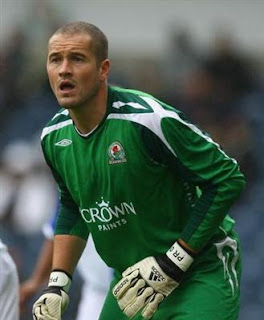 Paul Robinson's fresh start with Blackburn hit a speed bump in the 45th minute of his debut against Everton, when he conceded the sort of goal that has plagued him for the last two seasons. Mikel Arteta's free kick was a moment of inspiration from the Spaniard, and it's safe to say that from that angle and distance, Robbo was justified in expecting a cross. Nonetheless, to be beaten at his near post from that position will have done his confidence no good, nor that of his new supporters, accustomed to years of consistency from Brad Friedel. Coming as it did in the same week he was recalled to the England squad, it just highlights how thin Fabio Capello's current goalkeeping options are.

On the positive side, it seems he's slimmed down just a bit. I've given up hope that he will ever have the kind of razor-sharp physique most of his fellow pros maintain as a matter of course, but this is a step in the right direction. Also, for you glove anoraks out there, it looks like he has switched after years as a Nike endorsee to adidas.
Tweet