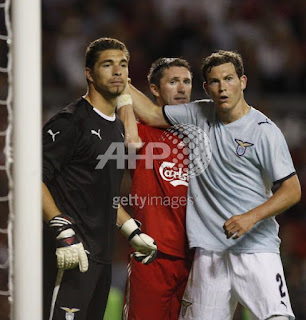 There he is, former River Plate keeper Juan Pablo Carrizo, now playing for Lazio. After finally sorting out his passport issues, "Amadeus" has made the move to Serie A. He replaces 43-year-old Marco Ballota, who performed admirably last season after young Uruguayan Nestor Muslera flopped when given a chance. Muslera, still at the club, amusingly claimed he "welcomed the challenge" from Carrizo. Write this down, Nestor: Juan Pablo Carrizo is entirely out of your class.

Meanwhile, in England, there are new starts for Paul Robinson, Scott Carson, and Brad Friedel. Big Brad should comfortably settle Aston Villa's goalkeeping, which has been shaky for years. Embattled England keepers Carson and Robinson, though, are both in need of fresh pastures to resurrect once-promising careers. Robbo replaces Friedel at Blackburn - no easy task - while Carson steps in goal for Premier League new boys West Brom. I wish them both the best of luck, and both of them will need it.
Tweet

Even the very knowledgable get predictions wrong now and again i guess... Maybe having Carrizo around was the making of Muslera? Always sad to see wasted goalkeeping talent though...

He had a cracking debut for Catania the other week. He's still plenty young enough to have a good career.