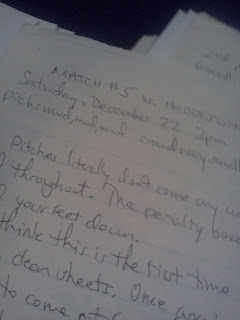 Back in season 1990/91 - before the internet, sort of - I played for Boreham Wood FC, a Non-League side in Hertfordshire which, at that time, was in the Vauxhall-Opel League. I had recently had a work permit application turned down, and with my career in flux, I knew I needed games. So I returned to the Wood, where I had spent the second half of the 87/88 season. I was 24 years old and still learning, and knew I needed to improve. In addition to working hard in training, and studying the top keepers of the day (Seaman, Southall, van Breukelen, etc), I began keeping a journal. After every game, I would go home and write down   every detail, starting with the basics (the date, time, opponent, ground, weather, pitch conditions, and result),  followed by a match report describing everything I'd had to do, and ending with a rating from 1-10 of my performance. I still have them today. Here's one:

Obviously the scoreline shows that this was a big improvement on our last three matches (ed-we'd conceded 2, 3, and 3). It was horribly windy, and I had it coming more or less toward me in the first half, only to have it change direction and come directly at me in the second half as well! That's not the first time that has happened this year.

I wasn't terrible busy in the first half. Once again, though, we let one of them clean in on goal right down the middle. I came out and he shot wide to my left. I had to really chug to get down to a diagonal through ball on the right side of the box, taking it off the foot of a forward. That one felt really good. Then Jason R was comically short with a backpass and I came out and whacked it a hell of a long way first-time.

We scored 15 minutes into the second half, and predictably came under some pressure afterwards. I was very quickly out of my box to send a left-footed clearance over the away stand. I was pleased with that one because if I hadn't come for it, the guy would have been in on goal. Soon after that one of them was clean in on goal, but as I came out, he shot over the bar. Then another through ball, down the right side, and one of them was right behind it. We got to it at the same time and I got my right foot to it  and it went into touch off him for our throw.

We held out for 75 minutes, but they equalized from a corner. It was driven low towards the near post, towards Rob F. I shouted 'Away!' but it got caught in a mass of legs, dropped perfectly to their #9, and he rammed it in low to my left. Damn. Then the same player drilled a 25-yarder right at me, face-height, and I caught it cleanly. At the other end, Jason and Steve P had good chances but couldn't finish, and it ended 1-1.

Oh I forgot, I did really well with a swirling cross in the first half. It came from my right and I stretched for it with my right hand and flicked it firmly out of trouble toward the left touchline. That one was tricky.
My rating: 7. Good off my line, comfortable handling, good kicking considering the conditions. Not too many actual saves. Cumulative rating (19 matches): 6.66.

Okay. Not a very thrilling match. I picked a short one on purpose. Also, the writing isn't great. That's something else I was still learning. But you get the idea. 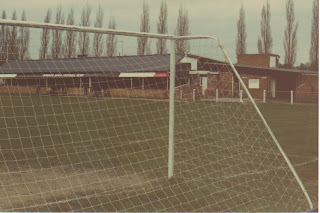 I did this after every game and found it very valuable. First, it made me think consciously about what had happened in the game, and honestly appraise my own performance. Second, it helped me identify trends. If I found myself writing "I was a little slow off my line" or "I came for the corner but got bundled off it" more than a couple of times, I knew there was something that needed to be addressed.

I wish I had done more, though. A lot more. I wish I'd jotted down a few notes before each game, noting how I'd slept, what I'd eaten, how I was feeling, and how confident or nervous I was. I wish I'd been a little more insightful about my confidence levels during the game, knowing that 'surface' confidence can fluctuate greatly during the course of a game. But mostly what I wish is that I'd done this for every game of every season, not just this one. I did it only sporadically prior to 1990/91, and never again afterward.

So the practical value in keeping a journal is that it forces you think think hard about every game you play, honestly analyze your performance, and identify trends. There's more, though. Take it from a man pushing fifty (sort of): no matter how good your memory (and I can remember a lot from a very long time ago), not everything stays with you forever. Write it down. Or, if you don't like to write, turn on your webcam and keep a video journal.

I'd be interested to know if anyone else keeps a journal, and what sort of information they record. Leave a comment!

I never heard of anyone doing a journal like this, but can definitley see how it would be a useful tool. Cool idea.

I kept one this year using a forum that I frequent. After every match I try to break it down much like you do. It helps once you sit back and read what you have wrote. Good place to train more on or just be more conscious of your decisions making.

Interesting piece, I have to agree that journals are an excellent personal resource for ambitious professionals.

Personally, as a referee, I record details of every game I officiate for professional and personal reasons.

I record the classification and type of games I referee so I know how many more games I need to do to reach certain requirements for promotion etc.

I also record cautions, sendings off, scores and my marks so that I can always refer to them for future reference (if I referee the same team etc) and input all the date at my disposal so I can evaluate it during the season. Therefore, when I look half way throuh the season and see over 50% of my cautions are for S1/2/3/4 I can evaluate my performance and see if there's anything I can do to change that by how I manage the game. I'm also hoping to record physical stats when I buy a fitness watch around Xmas and I think it's something any professional would benefit from- knowing how much ground they covered, max heart rate/ speed etc (maybe less so for keepers admittedly) but one of the great points you make is about pre match preparation. I had totally ignored that respect and it's something I'll add to my comment section in the future!

On a side, if anyone wants a copy of the Excel database I made to record my stuff (which you can edit appropriately), drop me a tweet @CanTheyScore.

Thanks for the comments guys. Chris, I never knew refs did this kind of thing, but I'm glad to hear it!

Brian, if you don't mind my asking, which forum do you use?

Good post, Justin. I've done this before, noting the same things as you mention. I've also added what I did for a warmup and any in-game mantras I used to stay focused. I've also kept notes on the opposition, such as which way any penalty kickers went, what the other team did with free kicks, their style of play (long balls into the box), etc. Helpful for future games against the same opposition.

I also keep small notebook where, on the first page, I have a kind of cheat-sheet listing phrases and important tips for games. This way, I can glance at it before matches to get some quick tips.

Modern football includes taking care of even the smallest details: warming up, match stats, knowing your opponent, analyzing your mistakes, having a comprehensive nutritional approach to sports, even taking care of the psychological aspect. With that in mind, keeping a journal is certainly an useful tool to improve your performance, especially at the amateur level, where your game isn´t analyzed a thousand times by the press and your own team´s specialists. It´s a great idea, and one I´m certainly willing to try

I have a journal from the 3rd floor of Moffett.

Great post. Keeping a journal from a coaches perspective is important as well. As a college gk coach, I write down every session that I do in a notebook. Each entry that I do comprises of the date, what my main areas of focus are for practice, and I also make sure each drill that I do is drawn out so you can see what was actually done that day. I also keep the notes that I take from games throughout the season and put them in the journal as well. Although it may take a bit of time to do this, there are quite a few benefits to having a journal. Obviously the fact that you document everything lets you look back and see what you have done with the gk's throughout the season (I think you dont want to be too repetitive with you drills), but I think it also helps the coach become a lot more orangized as well. Having a lay out of what you have done so far can help remind you of drills that you can do again or it can also provide you with new ideas for training also. Great stuff with the blog Justin, keep it going.

Thanks for all the comments and thoughts, everyone. I really appreciate it. Peter, that's a great point about the value of journals for coaches, too.