Maybe you've heard of it, maybe you haven't. GloveGlu, sprayed directly on the palm before playing, promises to revive the grip of old gloves and enhance the grip of new, in dry conditions or wet. I've been trying it for a couple of weeks. Here's what I've found: 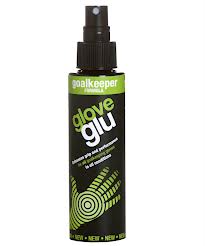 It certainly did revive the grip of an older pair of gloves. I tried it on a pair of first-generation HO Ghotta Hybrids. I did a video review of this specific pair of gloves back in July 2010 (see it here), wore the gloves a dozen or so times that summer, and had not worn them since, which means they've been sitting in a glove bag for over two years. Predictably, the grip had suffered from lack of use. There was still grip, but the latex felt firm, dry, and a little slick. I applied the GloveGlu thirty minutes before kickoff on a damp night. The gloves instantly became very tacky, so much so that the palms seemed to stick as I rubbed them together to make sure the product was evenly applied. As the GloveGlu dried a little, the tackiness settled down to a level comparable to Nike's Contact Foam or Uhlsport's Absolutgrip when new. An occasional problem with Uhlsport's APG back in the day was that it was so tacky it collected dust, dirt, and blades of grass. I don't believe GloveGlu will have the same effect, as the excessive, glue-like tackiness fades fairly quickly as it dries.

Tackiness does not always equate to grip, for whatever reason (one thought on this is that tackiness is a measure of how sticky latex feels when you touch it with a finger and pull straight up from the surface, but that's not what happens when you catch a football. The ball tries to move laterally across the surface of the latex. The better the grip, the quicker the ball will be stopped from sliding across the latex). In the warmup, the grip proved to be good, certainly much better than it would have been without GloveGlu, if not quite as good as it had been when the glove was new. I was satisfied. GloveGlu took a pair of old gloves that I would never have trusted for a game and made them usable again. It is very easy to see how a ten quid bottle of GloveGlu can save a goalkeeper a lot of money by extending the life of gloves. As long as there is latex to spray onto, you'll have a glove with grip.

Now here comes a surprise: I washed the gloves after the game, to get the leftover GloveGlu and 3G turf dust out. A couple of days later, I took the gloves down from their drying spot, and found that the latex now did indeed feel as soft and grippy as it had when brand new - certainly grippier than it had during that first use. My next game rolled around, this time in dry conditions, and after I applied the GloveGlu, the grip was immense. I did feel the need to reapply it after halftime, as the directions on the bottle suggest, because the tackiness had faded just a bit. Once I did, the tackiness and grip came back.

I have had only one reason for hesitation while using GloveGlu: like many keepers, I'm accustomed to spitting in my gloves during games to keep them moist and tacky. I'm unsure if this is a good idea with GloveGlu on the palms. It's a habit and is a good way to relieve low-grade tension during games, but especially when conditions are dry, it seemed to me it might be better to let the GloveGlu handle the tackiness.

Considering the price, I certainly think GloveGlu is worth a try. It may not be for everyone. Some keepers don't trust excessive tackiness, and prefer the consistency of plain supersoft. I will continue to use it, and it's possible my experiences will change as I try it in different conditions and with different gloves. I'm particularly excited about using it in cold weather, as I have always found cold, dry conditions to be the hardest from which to get the best grip from a glove. Low humidity is a not a friend to latex. I'm also looking forward to using it on a new pair of gloves with grip that is already great.

GloveGlu is the brainchild of goalkeeper coach and inventor extraordinaire Glenn Robertson, the owner and inventor of Responseball training systems. You can get GloveGlu from Just Keepers in the UK. If you're in the US, I'm afraid it's not available yet, as prohibitions prevent the international shipping of liquids (you may be able to get around this, as I did, by having a friend in the UK purchase it and ship it discretely).

Tried it yourself? Let me know what you think.

I play on some particularly awful pitches (see here http://farm9.staticflickr.com/8307/7836013106_7f246a6454_h.jpg), I am curious if the glu would cause dirt/sand/pebbles to stick to the gloves as well? Thereby mitigating any tackiness the glu provides.

Excellent question Brian - I just edited the article to answer it. Short answer is I've only tried it on turf so I can't say for sure, but I don't think it would be a problem - the tackiness is comparable to Contact Foam or AbsolutGrip, rather than the crazy tackiness of APG back in the day, which did indeed cause dirt etc to stick to the palms. When GloveGlu first goes on, it is indeed that tacky, but it dries and settles down pretty quickly.

Do you wet the palms of the latex before use? If so, how do you do that with GloveGlu: wet the palms and then spray the GloveGlu on? Or do you skip the wetting of the palms all together?

Good question. I skip the wetting of the palms altogether and just spritz them pretty good with the GloveGlu.

What an awesome post, I just read it from start to end. Learned something new after a long time. Its extremely good and very helpful for me.Thanks for sharing this great post.
Work gloves with grip | grip gloves

Hey, I think your blog might be having browser compatibility issues. When I look at your website in Chrome, it looks fine but when opening in Internet Explorer, it has some overlapping. I just wanted to give you a quick heads up! Other then that, very good blog! Working Gloves