Effective goalkeeper coaches need to understand every position on the pitch, and the game in general - obviously. Therefore, last year I did a long-overdue, week-long residential course, the NSCAA National Diploma. Here are some reflections.

Firstly, there's a lot of studying required. The manual is 86 pages long, and it's full of NSCAA-specific terminology like Progressive Methodology and Second Covering Defender that you can be quizzed about at any time. So I went over this thoroughly the week prior. 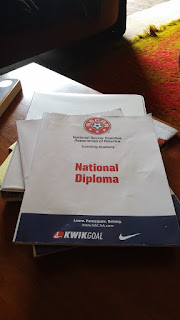 Once you get there, you get put into groups of 13 candidates with one instructor. My instructor was naturalized American Peter Gooding. He's a former President of the NSCAA, and was instrumental in starting the coaching courses a few decades ago. Peter is very relaxed regarding coaching methods, allowing for lots of individual variance and preferences. The bad news is he is a stickler for things like organization. A few people got marked down for transitioning too slowly from one activity to the next, or not clearly marking out the playing area, for example.

There were a lot of classroom sessions. These ranged from fascinating (the tactical sessions) to deathly dull (youth club organization). Often we were exhausted, so even the good ones were a blur. 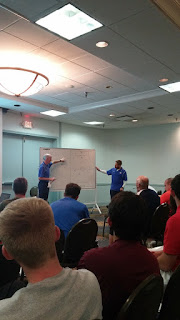 The reason we were exhausted is that the candidates serve as the players for all the sessions. The on-field sessions ran from 8:30-12:30 and again for a few hours after lunch most days (there were afternoon classroom sessions on a couple of days). For the first few days, the instructors ran the sessions, covering basic principles of attacking and defending, then moving into systems play and the differing roles, for instance, of midfielders in a two, a diamond. There was a pointed emphasis on playing out of the back, and playing in tight spaces under pressure.

On the third night, we went to a local high school game and were given a player to analyze. We then had to plan a complete training session around his main weakness. My guy was a striker who didn't know how to make runs, so I did a session on movement: 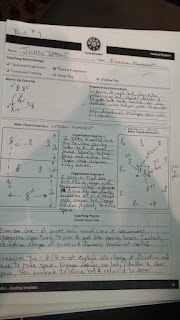 On the fourth day, the candidates began running 'practice' sessions. We were given a topic, had to plan a complete 90-minute session, and then ran just the first two activities, a warmup and some kind of 4v4 game (about 15 minutes), with the instructor taking notes. Everyone was nervous. Most of the candidates stopped play too frequently and talked for too long, and Peter let them know it. He also made sure everyone had thought through their topic and how to teach it. They would say things like, "This starts with a ball into the striker and-" and Peter would interrupt and say, "What if there's a defender in the way?" You had to have an answer every time he did this. He didn't even much care if your answer wasn't great; he just wanted to make sure you didn't get flustered or tongue-tied, and could move swiftly onto Plan B.

I got the worst possible topic for my practice session: first defender closing space from behind. In a 4v4 game, this rarely happens, as everyone is playing facing goal, so I designed a 4v4 game where it was 2v2 in each half, with all players restricted to their own half. This meant the two attacking players had to show and receive the ball with their back to goal a lot (since the defenders couldn't just carry it forward). It worked out pretty well, tho I got marked down a little for forgetting to put down cones on the halfway line.

Another day of instructor sessions, classroom sessions, and Q&A followed, and then on the final full day, we had our test. It was similar to the practice session, but longer, and in a 7v7 model. This time there was no feedback during or after. They just graded you and moved on to the next candidate. By now, people were comfortable with the methodology the instructors were looking for, and too exhausted to be nervous, so these went well. I was happy with mine. This is my group at the end of the session: 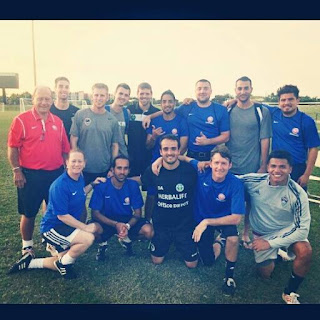 Lots of people celebrated that night, but there was still the final oral exam the next morning. We went in in groups of 4 and were questioned one at a time. We were asked for one defensive principle and how we would coach it to under 10s. The guys I went in with had celebrated a little prematurely the night before and were in rough shape. They struggled a little, but got through it.

There are no hard-and-fast prerequisite licenses, but it's not a course for raw beginners. You're going to have to project your voice and be confident enough to stop an activity and make corrections. You're also going to have to play, a lot. I was the oldest person in my group by a few years, and I was feeling it by the end of the week. But it's nothing a reasonably fit person can't handle.

The main positive for me is that the instructors WANT candidates to pass. They are not looking for excuses to fail you; they are instead looking for opportunities to improve your coaching methods, and help you be more effective. The course is not really about tactics. It's about improving the mechanics of running coaching sessions, how to plan, organize, and instruct with logical and understandable progressions. I've been in coaching for more than twenty years, and didn't expect to learn anything in this regard, but I did.

Another great benefit is the camaraderie and the shared knowledge that comes with working in a group. Because of all the playing, long hours on the pitch, and lack of sleep, you all suffer together, and grow close very quickly as a result.

I passed with the highest possible grade, R1. Overall, it was a great experience, and one I'd recommend to anyone serious about coaching who has not yet done a residential course.
Tweet

Loved the NSCAA course for the same reasons as you: the instructors WANT you to be successful and genuinely WANT to help you become a better coach. The group dynamic of the coaches bouncing ideas off each other and helping each other with their sessions SHOULD be what we do as coaches, not a secretive approach where coaches look down on one another because they have a different approach to the game. A guy I met on the National course in 2003 is one of my very best friends today, just by chance of us having a last name starting with "H." We still call each other and talk about problems we face with our players and teams to get different ideas on solving them. I am highly supportive of the NSCAA approach to coaching diplomas.

I'm the same - I still talk regularly with several of the people in my group (granted, it was only last year). The camaraderie of the group is what made it so special.