Home » » Spreading Yourself vs Staying Compact

Spreading Yourself vs Staying Compact

Watch enough games - or even a few - and it won't be long before you hear a commentator praise a goalkeeper for 'spreading himself' or 'making himself big' in a 1v1 situation. It is presented as a cure-all, but it's not always the right decision for a goalkeeper. As with a great many things about goalkeeping, it's all about the angles.


When to Spread Yourself 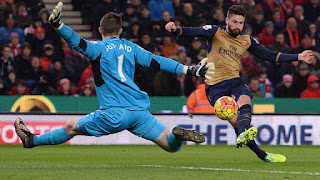 The time to spread yourself/make yourself 'big' is when an attacker  has been presented a chance from close range and a relatively central position. The idea is that because the attacker has a lot of the goal to aim at, he's going to aim away from you. So extending your arms and legs as far from the core of your body as possible, and into the areas the attacker is most likely shooting at, increases your chances to make a save.

Keep in mind that you're not actually 'bigger' when you spread yourself. You've just extended your limbs a little bit into the area the attacker is aiming at. In fact, you open up a lot of gaps for shots closer to your body, as you can see in the picture above of Jack Butland. The ball can go between or under his legs, or between his body and his arms. That's worth the risk when the attacker has a lot of goal to aim for. But it's why spreading yourself is not ideal for all situations.


When To Stay Compact 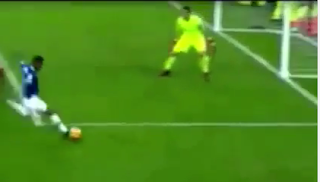 Above, we see Claudio Bravo set to deal with a shot from an angle. Our perspective here makes it appear he has left more space at the near post than he really has - from behind the attacker, we would see there's really not much goal to aim at. Unfortunately for Bravo, this shot beat him straight between the legs, which, from this angle, is one of the danger spots a keeper must be aware of. A more compact body shape, leaving no gaps for anything hit at the keeper, greatly reduces the risk of being beaten from a tight angle.

Later in my playing career, (when it finally occurred to me to think about these things), I would often say out loud to myself, "It's tight," when the ball was at an angle, as a reminder that there wasn't much to shoot at, and that the job of 'narrowing the angle' had already been done, simply by virtue of where on the pitch the ball was. It served as a reminder that the odds were in my favor, if only I would stand up, stay compact, and hold my line.

As with all things goalkeeping, these are not hard and fast rules. There are exceptions. For example, spreading yourself when the attacker is shooting from a tight angle can be effective if you have closed the ground between the two of you, getting so close that you're blocking the ball as it comes off his foot. Staying compact, meanwhile, can work in your favor from a central position if you feel the attacker is going to try to dribble you. As always, each situation is unique, so a 'one size fits all' approach is unlikely to serve you well in the long run. Read the situation, recognize what the attacker is trying to do, and react in the way that gives you the best opportunity to come out ahead.
Tweet