Sorry for the long hiatus from the blog. I returned to full-time coaching this summer and the combination of preseason, travel, and a packed schedule has meant this update is long overdue.

I've coached both male and female goalkeepers, as have most goalkeeper coaches, and I suppose I always subscribed to the common conceptions about their differences and similarities. But the last two months have caused me to re-evaluate some of these points, and the simple reason is that the standard of women's goalkeeping, at least at the higher levels of the game, has improved tremendously in the last decade. Many of the commonly accepted orthodoxies about female goalkeepers are simply no longer valid.


Nonetheless, women are still playing in a goal with dimensions designed originally for men. Women tend to be shorter and have a little less explosive jumping ability than men, and so what has always been true remains true: female goalkeepers need to play a little closer to their line than men, to reduce the likelihood of getting beat over the top.

In some respects, this is a similarity too, because I believe most male goalkeepers also play too far off their line, even at the highest levels. Petr Cech, for instance, never stops moving forward when the opposition is in shooting range, and will often be a full seven or eight yards off his line when a shot is struck from the top of the box. This narrows the angle, you say - but it also reduces his reaction time, and leaves him vulnerable to high shots looping in over his head. Mario Balotelli scored one such goal against Brazil in a friendly last summer, a well-struck shot that was nevertheless nowhere near the corner and would have been comfortably saved, had Julio Cesar been within a couple of paces from his line. 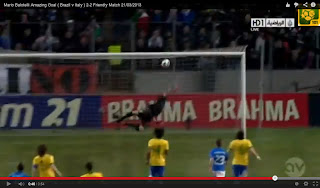 This should not happen.

Kicking and distribution has long been substandard in the women's game, but this too has changed. The female goalkeepers I coach at NC State can easily hit midfield with goal kicks, and so can most of the opposition keepers we've faced this season. I haven't yet seen a female keeper comfortable with side volleys, but have seen plenty of half volleys, which gives the same preferable lower trajectory.

Apart from stature and slightly less explosive jumping and diving ability, the technical area where female keepers are somewhat disadvantaged is, in my experience, core strength. Strength through the core, shoulders, and arms helps keepers hold shots and crosses when challenged and when falling to the ground. A strong core also helps with posture, set position, and injury prevention. Core work features heavily in the strength and conditioning program our players follow.

The physical is, of course, just one side of the story. I think in some respects, female keepers have an advantage when it comes to the mental side of the game. Men can be dominated by ego, making it difficult to accept mistakes and recognize the need to improve. This is a self-protective measure, sports psychologists will tell you, but the short-term good it may do is outweighed by the long-term harm.

I find the inverse more often to be true with female goalkeepers: they are quick to berate themselves, and the good ones channel that frustration into their training, desperate to improve. The danger, of course, is letting this short-term thinking damage their confidence and self-esteem. It's fine to acknowledge your weaknesses in order to improve; it's not so good if that turns into constant self-recrimination.

I don't think training sessions should be altered for female goalkeepers, but I think some coaching points and strength & conditioning routines benefit from being tailored to the specific demands of the women's game. There are some inherent differences between male and female goalkeepers, some positive and some negative, and there are some lingering stereotypes that are no longer accurate. As always, the best course is to evaluate goalkeepers individually and work to improve them, whatever their gender, height, or level of play.

It's so good to see recognition that there are differences in athletic profiles of men and women, and that different training regimens are being tailored for women. Thanks for this interesting article.