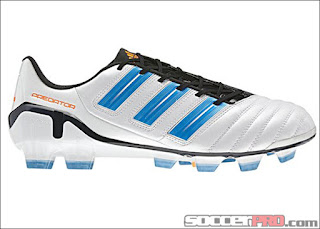 I started a lively twitter debate today with a simple statement: "Can a boot help your kicking? Short answer - YES." I was referring to the Predators I've been testing throughout February. Responses ranged from "No way - it's all technique," to "If you feel more confident then you'll kick better."

The reason I said "Yes" relates to the latter opinion: these boots look and feel like they are made to strike a ball with power, therefore I felt confident. When I'm confident, I feel free of tension. As it specifically relates to kicking, I don't try to force the ball in the air. I simply swing smoothly. This almost always results in better performance.

At forty five years of age, I still haven't found my foot speed or reflexes noticeably disintegrating. But my goal kicks have gone downhill badly. What once felt easy and natural has begun to feel laborious. This has affected my technique, as I find I've lost a lot of the natural rhythm I once took for granted.

It was easy once
There's a bit more to it than just confidence, though. I found the stiff sole plate helped my foot explode through the ball firmly and solidly. Watch the video for a demonstration of the sole plate's stiffness:

This took FIVE takes
The other aspect I found helpful was the Predator element on the instep. This has changed over the years, with various iterations of the Predator. The current manifestation is a clear silicon material which helps grip the ball and impart more spin when going for a bending ball. As the TRX-FG lacks a fold-down tongue, the silicone element also helps provide a firm striking surface, with just a bit more bulk.

That's not to say it is a perfect boot for me. Playing on a relatively firm pitch, I found the rear studs a little too long for comfort. After a long session with a lot of ball striking, my heels were a little sore. The sole plate wraps around the entire heel, and these raised studs help angle the foot slightly forward. adidas calls this configuration the 'Sprint Frame' and claims it angles the foot for optimum speed. This may well be true, but it didn't stop me grinding the rear studs down by two millimeters. If you play on softer pitches you won't find it an issue, but for me, they were just a bit too long.

As befitting a relatively expensive ($179.99 here) boot, the TRX-FG looks and feels like a high-end model. It is feather-light at 7.8 ounces. I stress that no boot is going to help your kicking if your technique is lacking, but will echo the thoughts of Sheffield Wednesday goalkeeper Rich O'Donnell, who added to the twitter debate by saying, "Look good, feel good, play good." These boots look good and feel good on me, and my kicking has benefitted.
Tweet

I feel you on the loss of the goal kicks. While never possessing a big kick, I was at least confident about getting a good flighted ball to near midfield. But now, at 42, I have completely relinquished the kicking to a defender, or if no-one is willing, toe-punching it just to guarantee distance. Odd how the punting hasn't really dipped though...

Personally, I can't kick with Adidas boots altogether, I had a pair of Adidas World Cup's, and more recently a pair of Predators, never buying a pair of either again... I think Puma Esito (The cheaper version of the Puma King) is just right for the way I strike the ball, the technique plays a massive part, and lately, the socks I wear have as well (tennis socks feel too tight, normal match socks feel slightly loose, better for the kick, very strange) but the boot also helps, it's about confidence, feeling at ease and getting the right contact with the ball. From the Adidas boots my kicks went from reaching the half way line with a low flight, and little to no accuracy, to reaching the other box with accuracy and the right height.

That's a good point about the socks. Everything can make a difference, I guess, if you notice it one way or the other - good or bad.