There's Going to Be a Book

So, a little news: I've written another book (here's my first one), and it's going to be available before the end of 2011. I'll have more news later, if you're interested, but for now, here's a sneak preview from the Prologue. Everything I've written is honest to a sometimes painful degree. 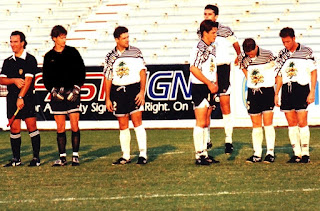 Crowds were sometimes as large as zero.

The sun is not yet high but it's already hot. Dew burns off cobwebs in wild grasses lining tidal canals and wetlands. A flock of roseate spoonbills, stained pink by the tiny crustaceans they feed on, stands in a shallow pond which reflects thunderheads already building on the horizon. From a deeper pond on the other side of the footpath, a splash. I turn and see what I've been looking for: an alligator, huge, has slid from the bank into the black water and cruises away toward the mangroves. I raise my camera and aim the heavy telephoto lens. The gator sinks beneath the surface.

I'm in the only place that puts me at ease these days, the Merritt Island National Wildlife Refuge. 140,000 acres of wetlands and trails, it harbors eagles, ospreys, wild boars, manatees, and even, according to rumor, Florida panthers. It is popular with serious birders, but I come to see the gators. Their primal repose is both exhilerating and calming. I've seen tiny newborn hatchlings squirming in the safety of reeds, and mammoth thirteen-foot males engaged in territorial fights. Less than two years from a life-changing foot safari in the wilds of South Africa's Kruger Park, I seek this kind of wilderness communion every chance I get. This means early mornings, and though I'm normally a late sleeper, I'm happy to rise before the sun to come here.

The gator surfaces, facing me, thirty yards away. I take a series of pictures before he loses interest and swims away. The heat rises. It's July in Florida. Sun and heat, stifling humidity. A whimper of breeze comes from the ocean. Sweat drips from my hair. I look at my watch: 9:47 a.m. I remember the game – we play at 7:30 – and my stomach tightens.

I come to this place because it's a refuge for me as much as it is for the animals. It’s a refuge from the undiagnosed, stress-related sickness I’ve suffered with for six years. After struggling in the cold and damp of the UK for years, I have come to associate sun and heat with health. But primarily it's a refuge from football, a game I still love in my heart but have come to dread, a game I had quit three years ago with no regrets, but to which I returned. I don't like to think about why I returned, because it feels so needy and pathetic. But the truth is we play in front of crowds, small but enthusiastic, and crowds feed my ego like nothing else. The same few hundred kids ask for my autograph after games, on the side of the pitch. Some of them wait until later, standing by my car, waiting for me to walk up in street clothes. The look on their faces is all wrong. They look at me as if I'm some big star, but I'm just a 28-year-old goalkeeper for the Cocoa Expos, playing for $50 a game in yet another in a series of failed American leagues. But I don't tell them that. I sign and pose for pictures and then drive away, ego glowing, hating myself for it.

I check the time again: 10:30. I have all day, but I know I can't stay out here for long in the heat and sun if I want to have enough energy to play well. I fantasize about staying in the wildlife refuge. I've brought lunch with me, and my truck, a Toyota 4Runner, has an enclosed bed that I can sleep in. It's 1995 and people have cell phones now, but I don't. Nobody can reach me out here. Just another thing I love about it.

But I can't keep the game out of my mind. I might not love playing any more, but I'm still competitive, still want to play well. Every time I think about it my stomach tightens. So many unknowns when you play in goal, so much beyond your control. An osprey screeches from a dead tree. I raise my camera. Now I'm too distracted by the game, checking my watch every five minutes. No use. I drive home and pass the rest of the day napping fitfully and forcing myself to choke down half a meal. I don’t eat well on game days.

The game itself passes in a blur. I play mostly on instinct now. At 28 I'm five or more years older than most opposition players. Not a significant difference, really, except it makes me feel mature and experienced, like I have an exoskeleton of confidence that these nameless kids can't puncture. It's ironic, but now that I no longer live to play the game, I'm playing better than I ever have before. 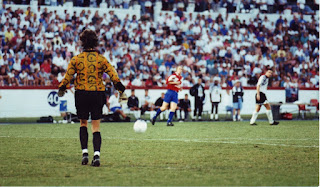 The jerseys, on the other hand, just keep getting worse.

We win, as always, although it was close this time. After the final whistle I sign my autographs and mingle with the fans and a few friends, but I don't linger. I remember that this isn't just another game. There is a showdown looming.

We march off the pitch as a unit and into the dressing room, leaving wives, girlfriends, family, and a few dozen fans mingling outside. We have just won the Eastern Division championship with a 2-1 extra time win. I don't know who we just beat, because it doesn't matter. I am covered with mud and am first into the showers. I know what is going to happen and don’t want to miss any of it.

The room is noticeably silent as we dress, the usual post-game banter replaced by a sort of nervous hum. Dave Mackey, a defender I’ve played with for years, stands in the center of the room, addresses team management – Cocoa Expo owner Rick Stottler and his assistant, Giles Malone – and asks the question we’ve all been wondering for weeks: why haven’t we been paid?

I don’t have long to worry about that, however. After listening patiently for a few minutes, Stottler suddenly leaps to his feet and bellows, “Stop right there! You’re not going to blackmail me! Anybody who thinks they’re going to blackmail me, there’s the door!” He points vaguely in the direction where a door might be. He’s not a young man, wears bottle-thick glasses and ill-fitting shorts. He’s getting more furious by the moment, doing a strange sort of hop from foot to foot as he sputters and fumes about being blackmailed. Dave is so stunned by this performance that for a moment he is silent, almost smiling, before patiently insisting that nobody is blackmailing anybody. We just want our money.

Standing in the background, watching all this with a look of dignified horror, is Ricky Hill. Over 400 appearances for Luton Town as a midfielder, three full England caps, winner of the League Cup in 1988. Somehow, incomprehensibly, he allowed himself to be talked into managing the Cocoa Expos, and it seems as if it’s now, at the tail end of the season, that he realizes what he’s gotten himself into.

There is an added complication to the hostilities: despite the nonpayment, a handful of players are still loyal to Stottler, and they begin contradicting Dave. This is rooted in a few related things: they all played for Stottler when he ran the program at Florida Tech, and they’re all English. We all get along, but the English players tend to keep to themselves, and when things go wrong, they close ranks. Once this happens, the confrontation with Stottler sputters to a pathetic end. I make eye contact with Keith Ames, a close friend for years, and we shake our heads.

When I get home, there is a message on my answering machine from Gary Graves, a reporter from Florida Today who covers the Expos. He wants my thoughts on the upcoming playoffs. The thought of more games to come makes my stomach hurt. I erase the message, take a deep breath, and phone Ricky Hill to tell him I’m quitting.

Well you just sold one copy.

Thanks Catfish! I appreciate it, tho it won't be available for awhile.

It is, as you described, quite candid.

On a lighter note, I would be very interested to get a look at some of those wild boards from paragraph 2!

Thanks for spotting the typo, Ira! Suffice to say, this is not quite a final draft.

Of course.
I had fun picturing wild boards though, maybe you hunt them with nail guns.
Can we be expecting an update when it hits the shelves?

I will definitely become a self-promoting attention slut as that time approaches, so don't worry, there will be announcements here & on twitter.

You just sold your first international copy too!

Dude, I didn't realize the game was like that for you. Growing up, you were 'the keeper' of Brevard. When we competed for that role at MIHS, you were nothing but a gentleman and a friend. I felt ostracized by everyone but you, my friend. I got that "I hate the game" feeling my junior year.

I am glad you are where you are now. The Game is so much better when you don't have so much invested in it. I turn it on and watch for the pure joy of seeing OTHERS compete. Your blogs are awesome. Your talent is awesome. I am glad to know you. And, yes, I will read the book. I do expect it signed; "To my fiend Marino, whom I had some wonderful days playing soccer in ASYO!" :)

Marino, thanks so much - that means a lot. Talk to you soon!