Home » » What Pundits Get Wrong About Goalkeeping, Part II

What Pundits Get Wrong About Goalkeeping, Part II 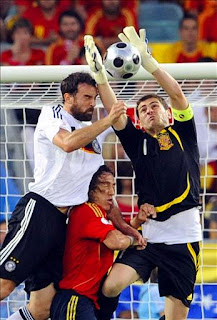 Looks like a good challenge, but which one of them is going to play the ball?

This one is simple. Pundits think goalkeepers are overprotected, when in fact they're not.

YouTube doesn't have a lot of clips of disallowed goals, so I can't go to the video for an example, but I'm sure you've seen this scenario: ball into the box, keeper goes up, contact, ball ends up in the net, ref disallows goal. The replay shows the striker making what looks like a fair challenge for the ball, jostling it from the keeper's hands. Cue pundit:

"That's not a foul for me. He's got every right to go for that ball."

And he does. But does he get a touch on the ball?

When two outfield players challenge for a ball in midfield, it's taken for granted that both have a "right" to challenge for it. But if one of them gets there first, gets a touch, and gets clattered by the other, then it's a foul, every time, and you'll never hear a pundit say, "He's got every right to go for that ball."

Now, there's no question that sometimes refs give goalkeepers the benefit of the doubt. We've all seen goals waved off when it turns out the keeper's own defender was the one impeding him, or the challenging striker never actually made contact. I won't attempt to defend those, except to say that every game you see refs blowing for fouls on outfield players when it turns out there was no contact. The point is that pundits need to see challenges on the keeper as they see any other challenge - the onus is on the striker to actually make contact with the ball, or make every effort to do so. If he doesn't, why wouldn't it be a foul?

Keep an ear open this weekend and let's see if we hear this complaint, and we can decide whether the challenge was fair or foul.
Tweet

Tottenham v Wolves today Gomez seems to have gotten the benefit of the doubt. Whats your take?

I agree, it did look like Gomes got a lot of help from the ref. Thanks for undermining my point, Gomes!

I think the big point commentators look for is the fact that the ball is in the air. You've stated that if you dont take the ball and make contact with the player outfield then its a foul, but at the same time if two players both jump up for a header if the losing player makes contact it's rarely a foul, and infact alot of the time when two people go up its often the player that wins the ball that has a foul called against them!

Just trying to put across the other side, when really I'm only jealous because in amatuer football ref's always side with the attacker, I've been pushed, kicked and elbowed into dropping the ball with no whistle!