You've got a Cup final, relegation six-pointer, or title decider coming up. How do you prepare yourself mentally, so that you can be sure of giving your best on the day? How do you stop pre-game nerves from negatively affecting your performance?

I still get a flutter of nerves before every game, even though I'm approaching forty-five years of age and playing in what is charitably described as a recreational league. If performance and results matter to you, then accept the fact that pre-game nerves are part of the equation. Embrace them. Nerves mean adrenalin is coursing through your body, heightening your awareness, sharpening your reflexes. I've made saves in games that I probably wouldn't have made in training, thanks to this extra jolt of adrenalin.

Nerves are only a problem when they become debilitating, either physically - you find your fingers trembling so much that you worry you won't be able to make a simple catch - or, more often, psychologically - in your nervous state, you begin imagining worst-case scenarios, which then affects your confidence.

Personally, I prepare mentally for each game by reminding myself of a few things. The first is that nothing that happens in the game is going to be a surprise, nor will it be anything I haven't handled successfully in the past. Now admittedly, this is more true for someone my age, who really has seen it all, than for a thirteen-year-old. Even so, I think it's a good strategy to remember that in the end, it's just football. Nobody is going to throw a kangaroo at you; they're going to try to kick or head a football past you. That's it.

You won't be seeing this.

The second thing I remind myself is not to second-guess my decisions. Effective goalkeeping is mostly about decision-making, and keepers who get stuck in two minds - or worse, change their mind - not only risk mistakes, but spread unease through the rest of their team.

The concept of visualization is nothing new, but I find it to be very effective. I imagine myself doing the simple things well: making a clean catch, striking a good goal kick, taking a cross under no pressure. Then, for the fun of it, I imagine making a spectacular save or two. I don't like to go overboard here, though. Just from experience, I've found that when I start thinking too much about turning in a performance full of pyrotechnic saves, I let myself down with something basic.

I know a lot of young keepers, being of the iPod generation, like to listen to music before games to get "pumped up." I think that's fine, although I am careful not to get too physically keyed up, because what happens if the ball doesn't come near you for thirty minutes? If you aren't calm, you're liable to get impatient and rush out for a ball you have no business going for. But I do like to use my iPod to watch motivational videos. Living in New York means I always have a subway commute to games, and I use it to watch this video of Neville Southall at least once:

Not only is his brilliance motivational, but the confidence you can see him exuding is infectious. And really, confidence is what it's all about. For me there are two different types of confidence. There's surface confidence, which reflects how you feel about yourself and your abilities at any given moment. Surface confidence can fluctuate. If you come for a cross and miss it, you're going to feel stressed and less confident the next time a cross swings over.

One thing I found in my career was that fear was a great motivator. For the four games I consider my debuts at various levels - first game in US college soccer, first Ryman League game for Borehamwood, first game in Scotland, against St. Mirren, and first game in the USL - I was absolutely petrified with nerves beforehand, and went on to play very well. I responded well when I felt I had something to prove, not only to others but to myself: can I play at this level? 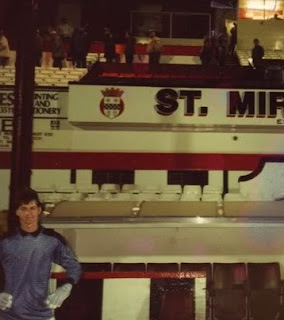 After the St. Mirren game: relieved.

Conversely, when I was feeling too comfortable with myself, I was prone to having a shocker. Complacency may make you feel nice before a game, but it doesn't seem to be the best way to inspire a good performance.

A lot of goalkeepers, some of them very good, rely on "superstitions" as part of their preparation. If you think you're playing well because you put your right shin pad on first, then so be it, just as long as on some level you recognize that this isn't really the case, that you're choosing to believe in magic, and that you're not giving yourself the credit you deserve. I've played well and I've played poorly, but it was never because of the route I took to the ground or the shirt I wore. It was down to me.

(I make a distinction between superstitions and rituals. Having a ritual, or routine, is a great way of making sure you remember all your gear and prepare your body properly to play.)