Home » » The 20 Ugliest Goalkeeper Jerseys in History, Part the Fourth: The Legends

The 20 Ugliest Goalkeeper Jerseys in History, Part the Fourth: The Legends

David Seaman played 75 times for England, including two World Cups and two European Championships. With Arsenal he won three league titles, four FA Cups, a League Cup, and a European Cup-Winners' Cup. All of that is rendered meaningless because of the one time he wore this: 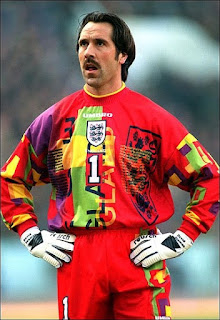 Oliver Kahn will be remembered as one of the great German goalkeepers of all time and a Bayern Munich legend. A ferocious competitor with an unmatched will to win, he inspired the new generation of German keepers such as Manuel Neuer and Rene Adler. He also wore shirts like this, and pulled his shorts up to his chest: 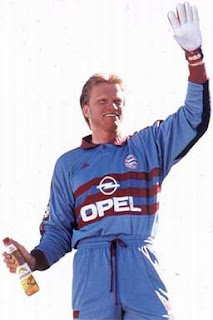 It doesn't get much better than Peter Schmeichel. The Great Dane stunningly led Denmark to a1992 European Championship triumph, then joined Manchester United, where he won a trophy collection for the ages. Thanks to United's sponsorship by Umbro in the 90s, he wore some of the worst kits imaginable, but this rainbow polka dot number from Hummel is a favorite of mine: 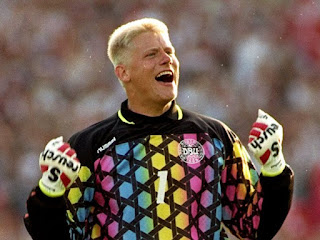 Jose Luis Chilavert of Paraguay is the premier South American goalkeeper of his generation. He was one of the stars of France 98, nearly leading Paraguay to a stunning upset of the host nation, and collected medals on both sides of the Atlantic. A free kick specialist, his career total of 62 goals scored is only 33 shy of Zidane's total of 95. Unfortunately, he often wore things like this: 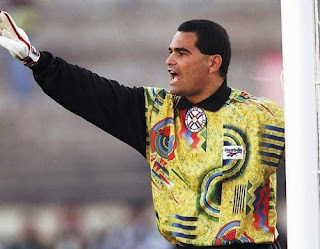 Because he played for Wales, Neville Southall never had the grand world stage his talent deserved. Although he was a big man, he had reflexes to match anyone who has ever played the position. He played with bags of confidence, a classic 80s 'stache, and a collection of pop-art kits that sometimes, as here, made him look like a day-glo candy treat. 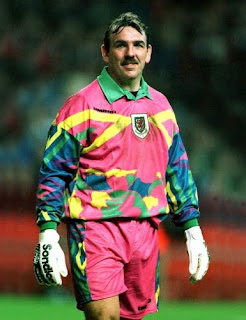 There we have it, friends. Twenty of the worst jerseys ever to stain a football pitch. But because so many of you emailed or twittered me examples of your own, I'll be doing a 'Reader's Favorites' edition on Friday. So you've got two more days to try to top what you've already seen here.

The rainbow polka-dot Umbro wasn't that bad. Well it looked good on me anyway.

I agree that those two aren't QUITE as heinous as some of the others. They're still bad though. Brian, maybe you had the chops to pull that look off. I know I didn't.