Uli Stein played with distinction in three different decades, claiming six caps for Germany (West Germany, at the time). He was part of a golden generation of German goalkeepers, led by Toni Schumacher and including such names as Eike Immel, Raimond Aumann, Bodo Ilgner, and Andreas Kopke. He also wore some of the ugliest kits ever.

First up is this stupid thing. What the hell is that thing? It's a one-piece training overall, so maybe it shouldn't even count. But it's my blog and I'm including it because it's so hilariously ill-fitting and ugly.

Next up we have this. At least it's color-coordinated, but come on. 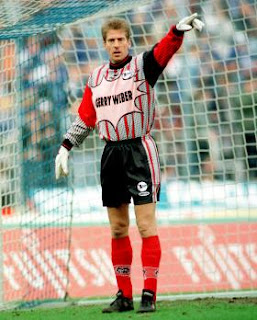 I love the Uhlsport logo, and normally, the bigger the better. Except here. Here it's just stupid.

Finally, we see Uli Stein being sent off for wearing a jersey six sizes too big with a child's crayon scrawling all over the front. 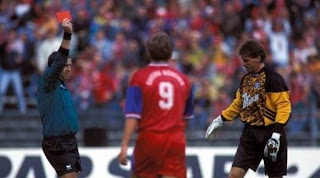 There are still ten more to come, including a couple sent in by readers. Got one of your own? There's still time, send it in.

I guess he borrowed that overall from Nigel Mansell. But c'mon at least it's fireproof...

he is totally missing!

Call me crazy, but I love pink jerseys!

Klaus Lindenberger was in goal for Austria during Italia '90 with a purple/yellow goalkeeping set.

Sadly, I don't have a digital pic to share

I know which kit you mean.
Its this one