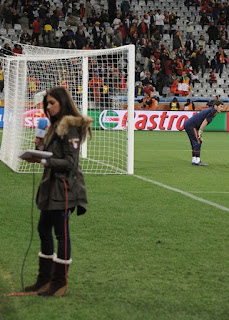 Julio Cesar and Iker Casillas were both expected to reach at least the semifinals, and neither has been worked particularly hard thus far. Casillas came in for a bit of criticism for the Swiss winner, but more interesting was the way a few internet cranks blamed his (frankly stunning) girlfriend, sideline TV reporter Sara Carbonero. That's her, above.

Manuel Neuer of Germany was considered die mannschaft's 3rd choice this time last year, but a combination of tragedy and injury vaulted him into the number one shirt. He looked less than clever when Matthew Upson headed past him, but his handling and decision-making has otherwise been sound. With his slightly-too-short shorts and green jersey, he's got an appealing retro look going on, too. Paraguay's Justo Villar also survived one mistake (against Italy) without being dropped, and, like the rest of his team, has performed with quiet confidence.

Ghana's Richard Kingson has been one of the surprise stories of this World Cup. Maligned in England, where he fails to play for Wigan, he has been sharp and brave throughout.

Maarten Stekelenburg has begun to step out of the considerable shadow cast by Dutch legend Edwin Van der Sar. He made a few key saves against Slovakia, and chances are he might have a thing or two to do against Brazil.

Sergio Romero of Argentina is not universally admired - some see him as a weak link in an otherwise outrageously talented side (but come on, it's clearly Jonas Gutierrez). But he's done his job so far, and Argentina score enough to mask deficiencies at the back.

Uruguay's Fernando Muslera has had a great year. He claimed the number one shirt at Lazio, helped his country qualify from the brutally hard CONMEBOL Federation (no San Marino or Faroe Islands, thanks), and has been in fine form so far.

Eight will be four in just a few days. Meanwhile, more Sara. 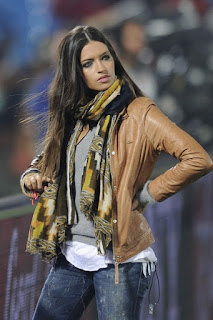