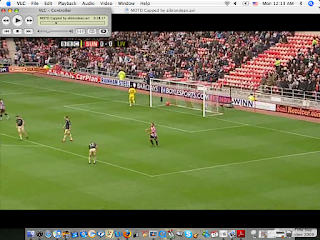 The beach ball. Fair or not, it was funny, unless you're a Liverpool supporter. We now know the referee should have disallowed the goal. But what many people don't seem to realize is that the ball wasn't knocked on the pitch just before the goal, giving Pepe Reina no chance to pop it with his studs. No siree. It came on the pitch almost from the start, and Reina made the odd decision to stick it in the back of his net. This screen shot from the first minutes of the game shows the ball nestled snugly in his netting, as the Spanish keeper waits for the ball to come back from the crowd after a stray shot.

Why did Pepe put it in his net? My guess is that he saw the official club badge on it, knew it came from his team's supporters directly behind him, and didn't want to appear disrespectful by popping it. Fair enough, but he might have considered giving it to a steward. Putting it in his net was asking for trouble, though clearly the odds against it blowing onto the pitch and deflecting the only goal of the game past him were astronomically small. Unfortunately (or hilariously, depending on your perspective), that's exactly what happened.

In other news, the big Milan vs Madrid game turned into a sad showcase of goalkeeper errors. Nobody does braindead loss of concentration like Dida, and his early clanger was so offensive it seemed to poison the usually brilliant Iker Casillas for the rest of the game. He allowed two curious goals as Milan ably demonstrated that those who proclaimed Madrid as Champions League favorites need to remember that to win ol' big ears, a team has to defend as well as they attack.
Tweet

I realise this is not the right place for this but I could not find any contact information on the site.

I work for KeepersKit.com, a company that specialises in selling goalkeeping equipment. The purpose of this email is to request a link in the 'Links section of your site.

Please let me know if you require any further information.