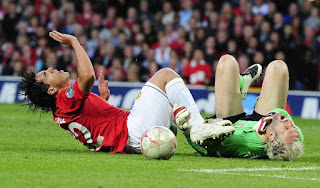 Arsenal are still alive in their semifinal tie with Manchester United thanks to a handful of quality saves from Manuel Almunia. He kept the defending champions out on several occasions, mostly in the first half, and survived a dangerous but not malicious challenge from Carlos Tevez (above, courtesy of theglovebag.com).

Arsenal improved slightly in the second half, though Almunia was left a spectator as Ronaldo's 25-yarder clipped the top of the crossbar. The Gunners will almost certainly have to keep a clean sheet in the return leg, as well as score at least once. On the balance of the respective performances, the odds are against them. But they can thank their goalkeeper for the opportunity.

On a related and less-positive note, would someone please tell Manuel it is no longer 2002? He is the last footballer in England still bleaching his hair white. It looks ridiculous.
Tweet