Home » mark schwarzer , scott carson , thomas sorensen » I Come Not To Praise Them

I Come Not To Praise Them 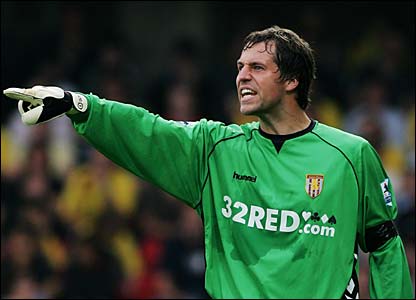 Thomas Sorensen and Mark Schwarzer are both in the news today. Schwarzer picked up an injury while training with Australia, and deposed Villa keeper Sorensen says he's now fit and will give Scott Carson a real fight for his place.

Beginning with the latter, no he won't. Villa fans have clamored for a more reliable keeper than Sorensen for the last couple of seasons. I thought he had a pretty good season last year, all things considered, but Carson is an upgrade, and has begun his loan spell in cracking form. Sorensen is not getting back into the side unless Scott gets injured, recalled by Liverpool, or perhaps lost on the way to a game.