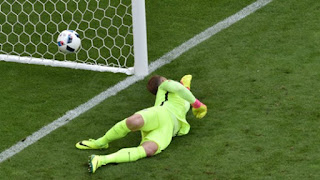 Nobody, it seems, likes Joe Hart very much right now. With Manchester City manager Pep Guardiola said to be looking for a new goalkeeper to begin his Premier League stewardship, Hart’s stock plunged to a new low with his underwhelming performances at the Euros, where he made no saves of note and allowed at least two soft goals. He was far from England’s only under-performer, but his penchant for tunnel theatrics and anthem-belting makes him an easy target. He still has backers among many City fans, having saved his best performances for the Champions League knockout games, but even they must be worried by recent developments.

Hart’s career trajectory has taken a number of sharp turns in recent years. Displaying the best form of his career, he was as responsible as any City player for their stunning title in 2011/12, but suffered through periods of indecision and bad form, and was dropped more than once, in seasons to follow. Every goalkeeper makes mistakes, but Hart’s have been more scrutinised than most, for a number of reasons: he’s England’s number one, he stars in a television advert which curiously implies that being dandruff-free is the key to England finally winning a penalty shootout, and he has a personality that appeals to some and repels others, but is not easy to ignore in either case.

I wouldn’t know, of course, but being a goalkeeper at Joe Hart’s level surely comes with more than enough pressure and expectations. Why pull ‘funny’ faces in a penalty shootout, when it only magnifies the pressure on yourself when you don’t save any of them? Why scream ‘motivational’ obscenities at your teammates in the tunnel when you know a live TV camera is three feet from your face? When Joe Hart shouts, “Right boys, right, get that ball, move that fucking ball, COME ON!” which England player, in the back of his mind, wouldn’t be justified in thinking, “How about you catch it?”

There is nothing wrong with intensity. Gianluigi Buffon is intense, too. But he knows how to channel that intensity into displays of controlled and focused goalkeeping. He also, not coincidentally, enjoys the benefits of a global reputation for excellence. Nobody watches Gigi belt out the National Anthem and thinks, “Wow, he really likes the attention.” They just see passion. He has nothing to prove to anyone about his goalkeeping.

Before he matured into the best tennis player in the world, Novak Djokovic was often guilty of ‘look at me’ antics that seemed borne out of the frustration of not receiving the plaudits of his exalted peers Roger Federer and Rafael Nadal. Eventually, he figured out the best thing to do was win more tournaments. It’s funny how nobody asks him to do on-court imitations anymore. He’s a champion now. He acts like one and gets treated like one. 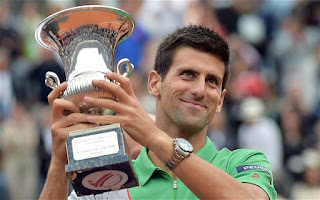 Pretty much done with the joking around now

The sight of Hart swearing and weaving on his feet, eyes bulging, almost unable to contain his energy just moments before kickoff, makes me wonder - what if he doesn’t have anything to do for the first twenty minutes? Where is all that adrenalin and excess energy going then?

I think that intensity and excess energy might be the reason for what I see as his one true weakness in goal: a persistent failure to hold his position and get his feet set before shots. His great strength is spreading and throwing his body at attackers shooting from close range. It’s brave and explosive and extremely effective, and he has pulled off a highlight reel’s worth of these spectacular blocks. But he sometimes tries to use this technique with shots from further out, when he’s too far from the attacker to be an effective barrier, but too close, by virtue of coming off his line, to give himself reaction time to make a save. And even if he did have time, he’s still moving forward, feet not set, which further reduces the likelihood of a save. Often, there is a defender back in a position to put in a challenge, or actually in the midst of tackling, when he does this. But the defender never gets a chance.

Below, you see a very strange situation: Raheem Sterling, while still at Liverpool, confronted with a defender and, one step behind the defender, eight yards from his goal, goalkeeper Joe Hart. 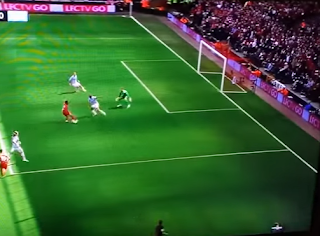 Hart’s positioning here effectively makes his defender redundant. Instead of having to beat first the defender and then the goalkeeper with two distinct actions, Sterling needed merely to shift the ball onto his right foot and shoot past both of them, which he did. Had Hart held his line, a shot from this angle, once Sterling beat the defender, would have needed to be exceptional to beat him. In the end, Sterling simply passed the ball into an empty net.

Here’s another example, from last season, away to Southampton. A defender closing with a tackle, with Hart rushing off his line to block, unable to get close enough to do so. This resulted in another ball simply being passed into the net.

And from the same game, yet another one. This looks like the same goal from a different angle. It’s not. Just the same outcome.

There are numerous other examples of this, and also of his tendency to guess or lean when an attacker is shooting from a distance normally best dealt with by getting set and reacting to the ball. City goalkeeper coach Xabier Mancisidor will surely be aware of these tendencies, and would have designed training activities to compensate. I see these not as technical flaws, but as a failure of patience, an honorable but misguided attempt to force the play when the situation doesn’t call for it.

We coach goalkeepers to be proactive, but proactive doesn’t mean unchecked aggression. It means reading the game, anticipating danger, and taking actions - whether through communication or positioning - to eliminate that danger before it can manifest in shots on goal.

There most certainly are times to ‘narrow the angle,’ such as when an attacker is in on goal and there are no defenders closing him down. But what Joe Hart does is consistently turn shots 15-25 yards from goal, and effectively make them 12-18 yard shots, in terms of his reaction time, by positioning himself so far off his line. And he does this with defenders in position to put in a tackle. 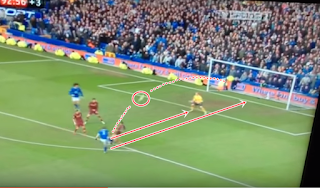 These weren’t the mistakes Hart made at the Euros, of course. Those - Gareth Bale’s free kick and Kolbeinn Sigthorsson’s tame low effort - were simple shot stopping errors, which all goalkeepers occasionally make. David De Gea and Manuel Neuer each allowed a single uncharacteristic goal at these Euros, but each also made a raft of signature saves. Hart made no such amends.

I have no idea why a goalkeeper with Joe Hart’s outstanding reflexes and athleticism doesn’t stand up and back himself to make saves more often - when he does it, he’s capable of brilliance - but I think this is where his rehabilitation is to be found. If he can rediscover the patience needed to read and react to situations, rather than always be looking to force the play, he can hold on to the number one jerseys given him by two now-departed managers. He has emerged from troughs of confidence before, but he’s never had so much to prove to so many.

As for his public image, maybe he doesn’t care what people think, and it’s not easy to change who you are. But I look to the Djokovic example again, and how changing the way he presented himself coincided with better results on the court. Once he stopped trying to be noticed for anything other than his tennis, his tennis improved. It could be a coincidence, but I doubt it.
Tweet

Great article... nice to see you back!

Just stumbled across this via a Sky Sports article - excellent analysis. Thanks.

Exactly the same things that a few of us pointed out years ago after a City Match. We were all goalkeepers and coaches so God help a bad game for any keeper when we all gt together.
Mark Hughes knew that years ago.

Thanks for the comments guys. I do think the move to Torino can only help. New surroundings, new circumstances, a chance to start afresh...


Joe Hart is awesome - on of the greatest goalkeepers with fantastic presence and overview of the game.
Here is a video i found on another goalkeeper website that shows a tribute of his amazing football goalkeeper skills.

Thanks for a great football goalkeeper blog!
cheers!