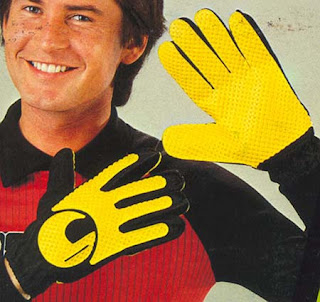 I had fun writing the 'Gloves I've Loved' series, but it didn't compare to the opportunity I had recently to actually handle and wear a pair of the Uhlsport 023, the very first proper goalkeeper glove I ever owned. Here they are, above, modeled by the obligatory 80s grinning fool. Uhlsport kept them in their product line for a few years starting in the late seventies. They featured Uhlsport's own 'three-level' latex on the palm and backhand, and a sumptuous velvet polyurethane body.

The three-level latex didn't perform as well as Uhlsport's smooth latexes, but the 023 was much cheaper than either the 031 or 025, the premium choice for professionals in those years. I could buy a pair of 023s after mowing a couple of lawns, and I went through at least five pairs from 1980 to 1983, using them mostly in training and club games.

Sadly, goalkeeper gloves, even when cared for, are not built for the long run, so it's very rare to find a perfectly preserved pair from the early 80s. Happily, though, my friend Rob from The Glove Bag visited New York recently, and he brought his pristine pair of 023s along. He got them from Dave Holmes, the sole purveyor of Sukan Sports in England, the company that introduced modern gloves to goalkeepers all across the UK. I could (and eventually will) write an entire post about Dave and his importance to goalkeepers, but today let's keep it to the 023s. When I pulled them from the box, the smell of that velvet polyurethane took me back in time thirty years. I was amazed by their condition. Apart from the velvet being slightly sticky, they seemed brand new, and the latex felt surprisingly grippy. 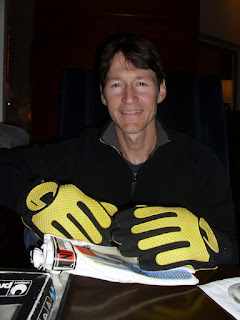 Yes, I know: my head is tiny

As romantic as the reunion was, it was also a reality check: keepers today have it so much better. The three level foam is at most 1.5mm thick, so forget all about shock absorption. The two gloves lying together palm-to-palm were thinner than one single modern glove, and of course, the 023 has no wrist strap.

Still, there's no point comparing a 30-year-old glove with today's gloves. The thing to remember is how much of a quantum leap it would have been in the late seventies, when many keepers still went barehanded or wore plain cotton gloves.

My thanks again to Rob for the brief but memorable reunion. I only hope that there are other classics out there somewhere, perfectly preserved in their boxes, just waiting to be discovered. And I hope that whoever discovers them then moves into the apartment next to mine, and I save them from a fire, and then they have to give me the gloves. That would be great.

As a goalkeeper I love your blog.

Just a question; have you ever tried any fingersave gloves? I broke a finger pretty badly when I was younger and fingersave gloves really saved me after that. The finger is still not as strong as the other fingers and can easily snap again so I am very thankful for that model.

Hi Oli, thanks for reading.

I've been lucky with finger injuries - never any breaks and only the occasional twist or sprain - so I don't normally wear gloves with finger protection. I do have a pair or two on standby tho, just in case I get an injury.

Thanks man for beutiful remembering on my young days! :) That model was actualy my FIRST pair and I loved them sooo much.

just been looking through classic Uhlsport gloves and found this!! Great read!! They were my first pair of gloves and from that moment i never wore any other manufacturer apart from Uhlsport mainly bought from Sukan sports i used to love getting the catalogue/flyer delivered and seeing what i could buy. :-) Thanks for the memories.

Thanks for reading, John! You can't go wrong with Uhlsport! (and thanks also Sedeslav! I must have missed your comment when you first posted it).