Home » » Goalkeeping Will Humble You

Goalkeeping Will Humble You 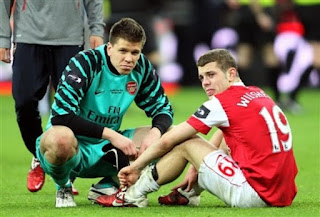 It was just a couple of weeks ago that young Arsenal goalkeeper Wojciech Szczesny was raising eyebrows with his gleeful tweets, delighting in Ashley Cole's missed penalty which sent Chelsea out of the F.A. Cup. After the dreadful mix-up between Szczesny and Laurent Koscielny which presented Obafemi Martins with the simplest of winners in the Carling Cup Final, many in the media recalled those tweets and were quick to cry "karma." I don't think it's as simple as that, though. I think, before Wembley, Szczesny simply didn't know what it was to fail. He knows now, and if he sticks the knife into another fellow pro again, I for one will be surprised.

Szczesny's meteoric rise to prominence has been, like Arsenal's sustained title challenge, a bit of a surprise. The maligned Lukasz Fabianski was only just coming into the kind of form that his talent had always suggested, before falling to injury. Szczesny took his chance remarkably well, playing with poise and confidence that bordered on, and spilled into, cockiness.

The test for any young goalkeeper comes when he makes an error. Koscielny is mostly to blame for what happened at Wembley, assuming Szczesny called for the ball, but he was still a bit passive in attempting to claim it. Had he simply plunged hands-first on the ball, he would have claimed it despite whatever nonsense Koscielny was getting up to. In his heart, Szczesny will know this. 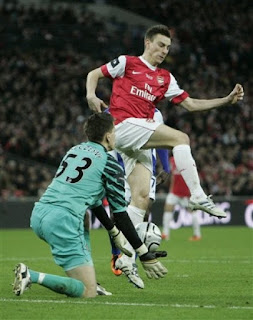 The contrasts - and similarities - between the two goalkeepers involved in the title race are fascinating. Edwin Van der Sar is the grand old man of goalkeeping, but his experience does not mask declining skills. Indeed, he's playing as well as he ever has, as seen in his commanding performance at Wigan. His confidence manifests not as grinning cockiness, but a barely concealed, raised-eyebrow disdain for anyone not fortunate enough to be him.

Szczesny is, of course, still learning his trade, and being tossed into a race for multiple trophies is a big ask for a twenty-year-old. Perhaps his bravado is a response to that. Thus far he has played with preternatural self-assurance, but it will now be tested. If there is any lingering effect from the Wembley disaster, Szczesny and Arsenal will find their fortunes crumbling rapidly. But if he can put it behind him, and even use the fear of that kind of mistake as motivation, then he may yet become the youngest goalkeeper to lead his team to the title.

Later this week, we'll be back with Part II of Things Pundits Get Wrong About Goalkeeping.
Tweet