Thanks so much for the comments, emails, and tweets regarding the ugly jerseys. Some of you sent in some pretty spiffy suggestions. Here are my three favorites.

Lance Shueneman sent me this beauty, and reliably informs me that it was worn by U.S. Women's National Team keeper Mary Harvey in the mid-90s. This shirt has one thing going for it: the iconic "Uhlsport Pro" badge on the chest. And it has one thing going against it: everything else. 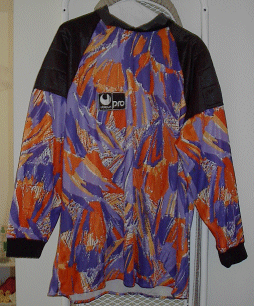 I suspect the inclusion of this next top will be controversial, as plenty of people loved it at the time, and presumably still will. I have a friend who, speaking of one-hit-wonders of the 70s, likes to say, "Just because you remember the song doesn't mean it was a good song." That sentiment is appropriate here. It's the adidas Taifun, worn here by Bodo Illgner. The problem is not just the jersey itself - in fairness, the one on view here isn't quite as bad as the blue version - but the fact that adidas abandoned two decades of beautiful, classic designs for this nightmare. Many thanks to Jack Cunha for the nomination. 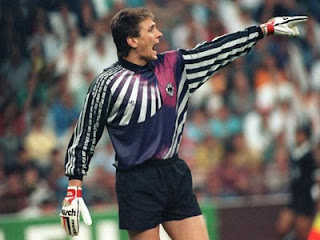 A few people on twitter mentioned the 'tortoise shell' adidas jersey from the 1994 World Cup. That would be this thing, which this picture (of Bulgaria goalkeeper Boris Mikhailov) shows was even worse that I had remembered: it's quilted. Quilting was just one of many crimes in the 90s, but it must have been even more awful than normal to wear a quilted jersey in the withering heat of USA '94. 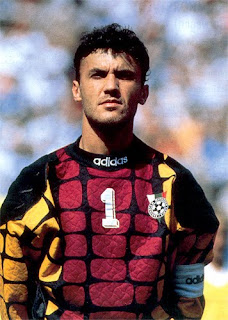 Finally, I would like to dispel the notion that only keepers in the 90s could look like idiots. Gianluigi Buffon very often looks like a homeless man who has evaded security and stumbled onto the pitch, never more so than in this picture, taken shortly after Italy defeated Scotland in a World Cup qualifying match. It was a rainy day in Glasgow, so what Gigi did was put on a rain jacket - a nice, big, puffy one - and then pull his too-small short-sleeve jersey over it. The ungainly headgear completes the picture nicely. 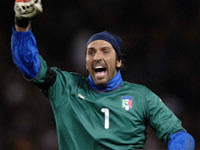 Well this has been damn good fun, and we've all had a damn good laugh. But it's time we left the ugly jerseys behind. Join me next week for a look at the more serious side of goalkeeping: clangers. Howlers. That's right, it's time to laugh at some of our fellow guardians. We laugh, for one day we too shall clang.
Tweet

You are killing me Justin!! The Adidas "tortoise shell" was my favorite. I even had it in two color ways.

Or maybe my taste is just that bad? Could be.

If you put several GKs in Taifuns together, they will be like a herd of zebras. It will certainly confuse an predators.

I have a jersey in my closet that was a gift from my (now) wife. While visually inoffensive, it is the most ridiculous thing... apparently she was frustrated at my continual bumps, bruises, and scrapes. This thing has padding everywhere... on the shoulders, down the arm, on the side... even on the chest. It looks like a motocross uniform! Needless to say, it has not left my closet in the 6 years since she gave it to me.

I don't know Josh, I'm 44 now and that sounds pretty good to me. The more padding the better!

I would do better duct taping my couch pillows to myself...

I loved the Taifun goalkeeper shirt, I have had 3 of them in my time. The purple one that Illgner wore at Italia 90, the yellow one that he wore at Euro 92 and there was a Greeney/Bluey one. These old shirts are much better than the modern rubbish we get today.

The taifun rocked and still does. Look out for the special pink glowing one. There's too many boring blank keepers jerseys, I'm not saying go crazy or go home but a little of madness looks good.

Missed ulhsport jerseys. ..they had some brilliant designs