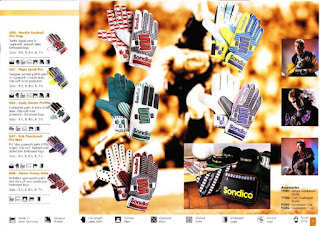 It saddens me to leave the Uhlsport 031 behind. But on we must move, this time revisiting a glove from Sondico, once the king of British glove brands. Their demise has been sad - they're still in business and producing decent products, but have completely lost their old identity - and it's hard to believe now, but at one time, they had more top flight keepers in their gloves than any other brand.
As you can see from the ad above (click picture to enlarge), they didn't go for a subtle look. Sondico was all about color and flair. The glove in question this week is the Solar, seen bottom-left. It wasn't a great glove. It was gimmicky and didn't grip particularly well, but it's nonetheless memorable to me.
I spent the 1989/90 season on an extended trial at Dunfermline Athletic in Scotland. I had played against them the season before, done well (story of that game still to come), and earned a trial. Prior to arriving in Scotland, though, I suffered through a months-long mystery illness which sapped my strength, stripped 20 pounds from my frame, and kept me from playing a competitive game for months. I was feeling better when I arrived in Scotland, but not much better. My stomach still twitched and quivered uncertainly, I had difficulty sleeping, and I was still underweight.
I was no stranger to arriving at a new club, knowing nobody. I had done it at Borehamwood and Brentford in previous seasons. From the very beginning at Dunfermline though, something was different. The players were...nice.
It helped, I suppose, that many of them had played in the game against Orlando the season before, but I suspect it was just that they were a happy bunch. When I arrived in early October of 1989, they were newly promoted, playing well, and actually hit top spot in the league, albeit very briefly. They had Ross Jack scoring goals, Istvan Kozma (before his ill-fated move to Liverpool) creating in midfield, and marshaling things at the back, captain Norrie McCathie.

Far from resenting my presence, the Dunfermline goalkeepers, Ian Westwater (above) and reserve John Hillcoat, were warm and welcoming. Westy, like the rest of the first team, was in great form, and Hilly was obviously highly promising. I fell between them in age. Hilly and I became fast friends away from the training ground, and began spending time together in town, playing endless games of snooker. Westy was only three years older than me, but Hilly and I both sort of hero-worshipped him. I was still rebuilding the confidence that had taken such a hit with the onset of my health problems, and it wasn't helped by the one unfriendly Par, Hugh 'Shuggie' Burns. Shuggie was always having a moan at Hilly and me in training games, but we noticed he never had a word to say to Westy. Even if he had, Westy wouldn't have cared. He had that hard outer shell that good professionals develop. It would be five more years before I developed it myself.
So, how does the Sondico Solar figure in all this? I got picked to play a game for the third team, against a Dutch side, at East End Park. By this time I realized my chances of being offered a contract were slim. Westy was in top form, Hilly was playing well in the reserves and was three years younger than me, and, crucially, I had no work permit. But the chance to play for the third team was a chance to impress, and I intended to take it.
At training that week, I had mentioned to Westy how much I liked the official club tracksuit. He agreed that they were nice, and that was that. Except that when I turned up for training the next day, he handed me a bag with the tracksuit inside, along with a new pair of Sondico Solars.
As I said before, it wasn't a great glove, really. The latex was inordinately firm, and the 'suction cup' dimples only made the palm feel stiffer. Nevertheless, they were brand new, so by that virtue alone, they were an improvement on my Clemence Pros. Sadly, for the big game at East End Park, the Dutch team turned out to be badly overmatched, and I spent ninety minutes with nothing to do. The gloves did continue to serve me well in training and further exhibition games, however, and they will always be a reminder of the warm and selfless way in which a top pro like Ian Westwater welcomed me to his club. Here I am, far right, after the game. I made the local paper. Shame the picture wasn't in color; the Dunfermline goalkeeper top was bright pink. 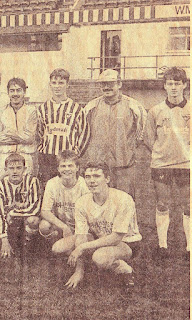 I fell out of touch with Westy over the years, but not Hilly. He's been to Florida to visit me three times, and we stay in touch through email and Facebook. Sondico continued to produce colorful, exciting gloves for a few years, but it all started to go wrong for them in the late 90s.

The saddest postscript to all this is that Pars captain Norrie McCathie died of carbon monoxide poisoning in his home a few years later, only 34 years old. His death was a terrible loss to Dunfermline Athletic, the city, and Scottish football.

To finish on a happier note, here's my favorite picture of Hilly:

Excellent post. I had those very Sondicos. I agree that they weren't an especially good glove, but they sure had a memorable look!

Thanks for reading, Newly. I can still remember the way those individual 'suction cups' would pop out once the latex around them started to wear down. As you say, not great but memorable!

Rather cool blog you've got here. Thanks for it. I like such topics and anything connected to them. I definitely want to read a bit more soon.

Thanks for that, I'm a big Pars' fan and that era was my favourite time to be a supporter. I was a teenager with plenty spare time to get to matches and we had an excellent crop of players and a manager who had just as much love for the club as the fans did - I can't believe you didn't mention Big Leish by the way!

I met Norrie once or twice, he was always the sort to make time to speak to fans and talk up the club.

Today is the 17th anniversary of his passing. RIP Mr Dunfermline.