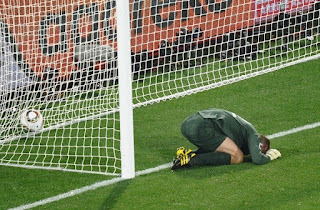 We're two days in. I had hoped to keep things positive, but the biggest goalkeeping story so far is the galactic clanger dropped by Rob Green against the USA. Although it tilted the result favorably for my country of birth, I felt awful for Rob, a standup pro and, by all accounts, a good guy. Whose life will probably never be quite the same again.

In his post-match comments, he was quick to blame the ball. Replays didn't suggest that the ball swerved or moved unusually, and later, Green accepted the blame and vowed to move on. The question now is whether Fabio Capello sticks with him, or turns to David James or Joe Hart.

In happier news, the first four games produced several impressive performances. Home keeper Itumeleng Khune was outstanding against Mexico - certainly more so than surprise Mexico starter Oscar Perez, who looked unconvincing on more than one occasion, but was blameless for the tournament's opening goal.

Nigeria's Vincent Enyeama turned in an astounding performance to keep Leo Messi and Argentina relatively at bay. If, like me, you had never seen much of him before Saturday, enjoy the video below (click the link - the video's owner doesn't allow embedding. And don't blame me for the music).

What about Tim Howard's fine performance? Not spectacular, but he was strong and solid in goal. Just what I'd expect from him!

I agree Chris. Let's hope for more against Slovenia - after which I'll be updating.