We've heard a lot about goalkeeper clangers so far during this World Cup, but there have been at least as many brilliant performances as dreadful errors. Rob Green's mistake will, of course, live in infamy, and unfortunately for him, he wasn't given the chance to redeem himself. But other keepers are using the world stage to forge or enhance their reputations. From the spectacular (Enyeama, Khune) to the solid (Howard, Schwarzer, Sorenson) , we've seen multiple displays of calm, assured goalkeeping.

The Jabulani ball seems to be causing more problems for outfield players than for goalkeepers so far. Free kicks are sailing high, crosses are straying out for throw ins, and even simple passes seem to be beyond the capabilities of many players - or, in the cases of France and England, entire teams.

And hey, how about those special black and yellow World Cup Uhlsport gloves? Sweet baby Jane, I want a pair. 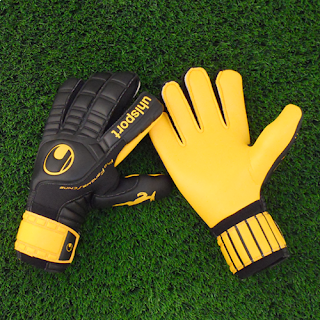 Add Paston to that list of Goalkeepers with stellar performances, the New Zealander turned pro at 27 I am sure all know.

For the Jubilani ball, I do wonder if the Paraguayan goalkeeper had some problems judging the ball on the Italian free kick they scored on instead of just saying it was an error of judgement. Also, the poor Japanese keeper Kawashima blocking Sneijder's of Netherlands shot into the goal. I haven't seen good replays of that yet and I think it was probably just a cannonball that kareemed off his gloves but there is room there to wonder if the Jabulani could have affected that one too.

Good point Tom. I did see a replay of Sneijder's goal from high above the pitch that showed the ball swerving pretty hard back to the keeper's left, away from his dive. I don't think Paraguay's Justo Villar can blame the ball, though - it looked like a standard floated corner to me.

Oh and yes, Paston was terrific today, very pleased for him. The strangest thing about him only turning pro at 27 is that he looks like he's still only about 21. I can't believe he's 33.

Very interesting and informative blog, thanks for publishing it for us please keep sharing on Goalie Gloves. For more information, you can visit us.