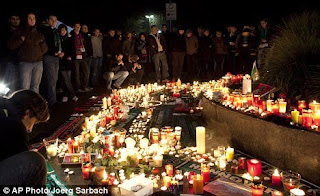 By now, the news is well known: Hannover 96 and German National Team keeper Robert Enke is dead, after an apparent suicide. Enke, 32, lost his baby daughter Lara in 2006, and evidently has struggled with severe depression ever since.

I know suicide is selfish, and he leaves behind not only a wife but a recently adopted baby daughter, which greatly magnifies the tragedy. But clearly he was deeply depressed, and lived every day in emotional agony. It's certainly not for me to judge him. I prefer to remember the humanitarian (he was a spokesman for PETA) and the footballer.