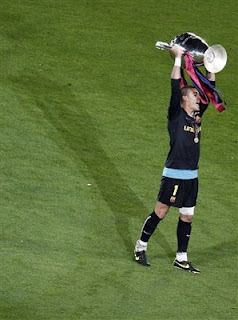 Barca won, and Victor Valdes kept a clean sheet. After a nervy start - in the first minute he played a ball directly into touch deep in his own half, trying to be clever; and he was more than a little fortunate that Gerard Pique was on hand to stop Ji Sung Park from scoring when he spilled a vicious Ronaldo free kick - Valdes turned in a solid performance, though he was tested little. He made a good save from Ronaldo almost immediately after Barca went two-nil up. It's a second Champions League triumph for Valdes, who nevertheless still has doubters and is nowhere near a spot in Spain's World Cup team.

Some pundits and United supporters felt Edwin Van der Sar could have done better with Samuel Eto'o's opening, and ultimately decisive, goal. You never want to see a keeper beaten at his near post, but in his defense, it was a toe punt that dipped noticeably.

It's a bitter end to an otherwise glorious season for United, but nobody would begrudge Barca's night of glory. They were the better team on the night (though Chelsea fans will still say, with some validity, that they should have been in Rome instead of the Catalans).
Tweet